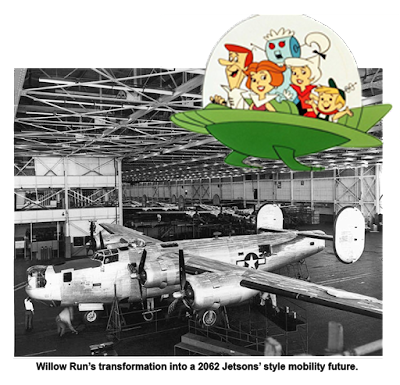 The other day, a few miles from my location in Downriver Michigan, a few politicians gathered for a photo opportunity. They performed the time-honored, “throw-a-shovelful-of-dirt-toward-the-camera” groundbreaking ceremony at Willow Run Airport, Ypsilanti Township, MI, close to the location of the former, massive Willow Run assembly plant. During WWII more than 8,700 B-24 bombers were built there.*

The new facility, which the dignitaries celebrated, is expected to be in operation by December, 2017, for the American Center for Mobility (ACM). ACM is a non-profit testing and product development facility for future mobility, designed to enable safe validation of connected and automated vehicle technology, and accelerate the development of voluntary standards. 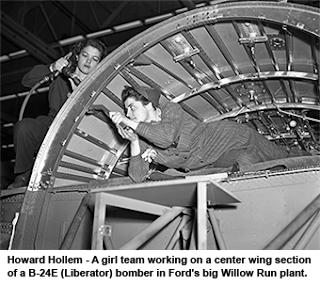 Back in the 1940s thousands of Metro Detroiter workers, many of them women of “Rosie the Riveter” fame, came to Willow Run to work on those airplanes. Over the next few years, the facility itself grew in stature to represent in many ways the best of the “golden generation”. The women proved their value and resourcefulness in a multitude of ways and the B-24 played a huge role during the war.

After the war, General Motors Co. repurposed Willow Run as a powertrain plant.

A few years ago, you will recall, GM fell into hard times and the U.S. Bankruptcy Court created RACER Trust to dispose of properties and facilities owned by the former General Motors Corp. Willow Run became one of the “disposed” facilities, and most of the massive structure was demolished. The remaining portion was sold to the Yankee Air Museum. 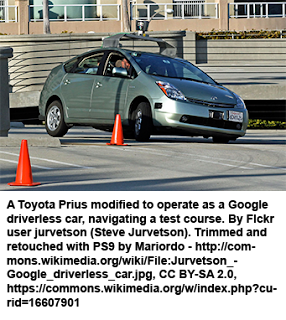 ACM has great plans for the new facilities it is building on the legendary property, Explained John Maddox, president and CEO of ACM, “We envision the American Center for Mobility as a global hub for connected and automated vehicle technologies supported by Michigan’s high concentration of automotive expertise. We are excited to be partnering with the state of Michigan to establish a fully-capable, real-world testing and innovation center that will be instrumental in putting self-driving cars on America’s roads.”

“Self-driving cars” aka “autonomous cars” or “driverless cars”… Now, this is the technology that will put us one up over the Jetsons. You remember them, the 2060 family. While their vehicle could fly, it still left the steering to George, the head of the Jetson clan.

Our future car? Well, it will steer itself while we try to “relax”. 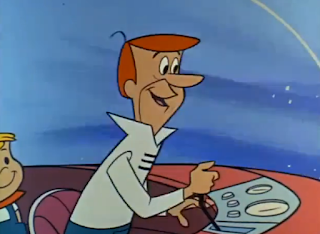 Go here for an episode of the Jetsons:
The Jetsons S01E04 - The Space Car