Construction on the Detroit/Wayne County Port Authority's riverfront dock and terminal building is well underway. Last week, work began on its off-shore wharf, which will enable docking of vessels of various sizes. The construction entails the construction of a 200-by-30 foot steel pile-supported structure that will reach 40 feet into the river. 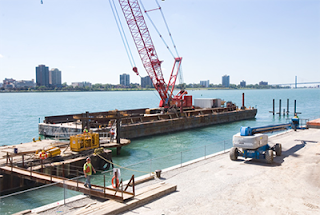 "The wharf will allow us to have multiple berths and still use the sea wall," says John Kerr, the Port Authority's economic development specialist. "It's meant to handle different-sized vessels, accommodate small crafts and large, plus it gets us into deeper water."

Kerr envisions users to be Great Lakes cruise ships, party yachts like the Ovation and Infinity, tall ships, visiting Naval frigates and a commuter ferry service between Detroit and Windsor.

The latter just got a major boost from the Obama administration, when Department of Transportation Secretary Ray LaHood recently named the ferry as an initial project of the American Marine Highway program, making it eligible to compete for future funding once feasibility analysis is complete.

The terminal building is 21,000 square feet and will hold a customs processing area, ticket counters, restrooms and a lounge area, the port authority's office and a public plaza with space for special events and educational interpretive exhibits.

The $22 million project has been funded entirely through competitive grants, including USDOT TIGER funds. "We've been successful in bringing some of these dollars back to Michigan," says Kerr, who hopes all construction will be complete by the end of 2010.

While the wharf is being built, likely through the fall, a small portion of the Detroit RiverWalk between the General Motors Renaissance Center and Hart Plaza will be closed and pedestrians and cyclists will be re-routed onto Atwater Street.

Go here for more information: Detroit/Wayne County Port AuthorityWriter: Kelli B. Kavanaugh
Posted by Ron Baker at 7:05:00 AM No comments: