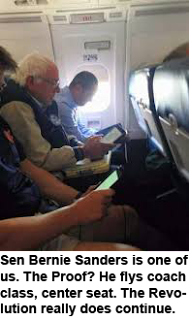 “Donald Trump tapped into the anger of a declining middle class that is sick and tired of establishment economics, establishment politics and the establishment media.  People are tired of working longer hours for lower wages, of seeing decent paying jobs go to China and other low-wage countries, of billionaires not paying any federal income taxes and of not being able to afford a college education for their kids - all while the very rich become much richer.

“To the degree that Mr. Trump is serious about pursuing policies that improve the lives of working families in this country, I and other progressives are prepared to work with him. To the degree that he pursues racist, sexist, xenophobic and anti-environment policies, we will vigorously oppose him.”

Ah... I'm with Bernie. The guy who flys coach class, center seat is the MAN. He really is one of us. www.legacygrandkids.info


What happens now?
We believe in America. We fought for America. Still, we are people who believe we are a free people. Not one of us will knowingly accept slavery.
While our blood boils and our anger has risen to unimagined  heights — just like the characters depicted in Les Misérables  — we will take a  different path to right the wrongs. We have a plan which will spread throughout the world because it serves the 99% everywhere. After all, Freedom is international.

We are All Partners in This Life. First, We Agree to Help Each Other.
Posted by Ron Baker at 11:33:00 AM