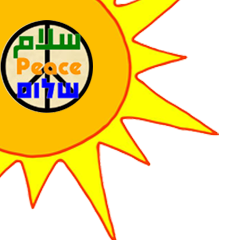 The sun is bright and the sky is clear today.

Why? Because the leaders of two churches have gathered the courage to apply Christ’s teaching and make his words live in our world.

At the recent biennial, the General Assembly voted (429-175) to change the denomination's Book of Order to describe marriage as being between “two people” and allow its pastors to officiate same-sex ceremonies in states where gay marriage is legal.

A majority of the church's 172 regional bodies, called Presbyteries, must now approve the decision before its official, a process that can take up to a year.

Also, the church voted to divest shares of Motorola Solutions, Caterpillar and Hewlett Packard which are worth about $21 million in favor of nonviolent investments in . (2)

“The church is not the first religious group to divest, though it's the biggest and most influential. The Friends Fiduciary Corp., which coordinates investments for 250 Quaker groups, divested from Caterpillar, Motorola Solutions and Veolia Environment in 2012. Last year, the Mennonite Central Committee decided to not "knowingly invest in companies that benefit from products or services used to perpetrate acts of violence against Palestinians [and] Israelis." Although the United Methodists voted against church-wide divestment in 2012, its General Board of Pension and Health Benefits decided last week to sell its stock in G4S, a prison and security services company, after members asked questions about its work in Israel and the Palestinian territories.”

“Not all Jews came out against the Presbyterian vote. Jewish Voice for Peace, a pro-divestment group based in , , and , , sent several rabbis, many of the Reconstructionist denomination, to lobby in .”

"We are grateful the church voted not to profit from the suffering of Palestinians under 's 47-year-old occupation," said Cecilie Surasky, the organization's deputy director. "Now that U.S.-backed peace talks have proven to be ineffective, we hope that others, including Jewish institutions, will follow suit. Divestment has become one of our best hopes for change."

And, importantly, Pope Francis announced the excommunication of the mob.

Pope Francis on Saturday took on one of 's most dangerous organised crime groups, calling it an example of "the adoration of evil" and saying Mafiosi "are excommunicated".

The pope, speaking about the 'Ndrangheta crime group during a mass in the southern , issued the strongest attacks on organised crime since the late Pope John Paul lambasted the Sicilian Mafia in 1993.

"Those who in their lives follow this path of evil, as mafiosi do, are not in communion with God. They are excommunicated," Pope Francis said in impromptu comments at a mass before tens of thousands of people.

He told the crowd: "This evil must be fought against, it must be pushed aside. We must say no to it."

He branded the 'Ndrangheta as the "adoration of evil and contempt of the common good" and said the Church would exert its full force in efforts to combat organised crime.

Today, I can clearly see the foot prints in the sand along the shore which Christ walked. The same path we sometimes remember to try to follow.

Getting the Job Done, No Matter What it Takes

I've been working on a project about what makes an excellent leader and revisited a book written by Douglas Brinkley, The Boys of Pointe Du Hoc.

While some of the text is devoted to Reagan’s 40th D-Day Anniversary speech and his speech writer, Brinkley described the history of the Army Rangers and their role in taking out the big guns at Ponte Du Hoc during the D-Day invasion.

When I heard Brinkley recount the story of the Rangers scaling the cliffs and the terrifying loss of men, 70% I believe, I also remembered reading Cornelius Ryan’s The Longest Day, in which he said, when the few surviving Rangers took the gun emplacements they found them empty.

Ryan never found out the rest of the story: the Germans had only pulled the guns out of their emplacement and moved them back away from the shore in order to avoid the allied bombs and naval gun fire. They were simply waiting for the best time to bring them back into position and then open up on the landing fleet.

What stopped them from doing that?

Brinkley discovered that a couple sergeants survived the battle for the emplacements. When they discovered them empty, they still went on to complete their mission, which was to disrupt German communications and interfere with troop movements behind the gun emplacements.

They had only 11 men but moved out anyway. Soon they discovered heavy equipment tracks leading to an apple orchard. They followed them and found the “five camouflaged guns in ready firing position with ammunition piled nearby”. Somehow the gods of war were kind that day because the German crew and defenders were clustered away from the guns at such a distance that the two sergeants were able to disable them with the thermite grenades that they and the others were carrying.

For me this story underscores what our military does do right most of the time: empower all of our people with a “can do” spirit to complete whatever mission is assigned and train them to use their minds and ingenuity, stay alive, and get the job done no matter what it takes - no matter one’s rank.

One of us, the everyday Joes and Janes, will get the job done.
Posted by Ron Baker at 12:42:00 PM No comments:

Worthy of Our Heritage

While reading Dr. Kaye’s book, The Fight for the Four Freedoms: What Made FDR and the Greatest Generation Truly Great, my mind kept going back to conversations I had with my father. Enlisting after Pearl Harbor, he served in Patton’s Third Army, 80th Infantry Div. Somehow he survived continuous battle from the post D-Day landing at Omaha Beach through the relief of 101st at Bastogne, during the Battle of the Bulge, and then on into Germany. With frostbitten feet, severe loss of hearing and finally wounded by enemy mortar fire, he came home in 1945 to recuperate at a Colorado VA hospital. Along with millions of other GIs he was happy to be alive and to begin living his life. And, like countless other GIs, a tiny bit of recognition for his selfless acts of combat bravery came in the 1990s when his decorations finally arrived at his home in .

In every page of Dr. Kaye’s book I saw the faces of my father and my mother, a hero, too, who contracted TB while in nurses’ training during the war. As young people and later in life, they actually believe in and lived the Four Freedoms each day. They put their faith in President Roosevelt and trusted him because of what he did. He got it done and never gave up. Just like them.


Dr. Kaye has done much more than masterfully paint the FDR and Four Freedoms stories. He has given us a gift: to see the faces of our parents one more time and revisit what made them the great, matchless people they were. Further, he has challenged us all to live up to, and become worthy of, our heritage - hopefully, some day soon.
Posted by Ron Baker at 6:43:00 AM No comments: