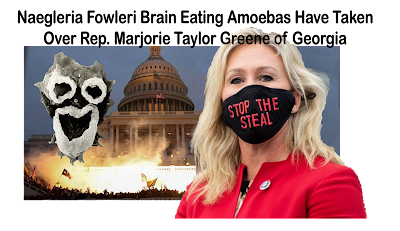 Rep. Marjorie Taylor Greene (R-Ga.) reminds me of Naegleria Fowleri ameba, the rare “bugs” that infect victims by entering up the nose to the brain and destroy the brain tissue. In her case, it appears she is trying to become a “novel” variety – the Naegleria Fowleri ameba QAnon conspiracy kind – and infect the brains of her Republican Congressional colleagues.

Now, this from CNN: “In a video that surfaced Wednesday, Greene is seen harassing Parkland shooting survivor and gun control activist David Hogg outside the Capitol. In the video from March 2019, she calls Hogg a "coward" and said he was "paid to do this," repeating a malicious lie that Hogg's activism was paid for by billionaire philanthropist and Democratic donor George Soros. Survivors of the Parkland shooting and victims' families have called for Greene to resign.”

Maybe, someday, a Republican leader will figure out that Taylor Greene's brain eating ameba will be fatal if left untreated.

"She is a depraved person who ran for Congress on a lie. She called Parkland a lie, Sandy Hook a lie, Las Vegas a lie, and 9/11 a lie. She has no business being in Congress."

The Capitol Hill insurrection of 6 Jan 2021 was a traitorous act orchestrated and incited by Donald Trump to overthrow our Democratic Republic. Trump’s actions were a heinous treachery, exponentially exceeding the treason of the most hated of all American traitors, Benedict Arnold.

Donald J. Trump, while President of the United States, incited insurrectionists into the Capitol building for the purpose of overturning the American voters’ will in favor of his desire to continue in power as President. Further, his followers were intent on capturing and murdering members of Congress as well as Vice President Pence.

They failed — only by mere seconds — the narrowest of margins.

In the process of following Mr. Trump’s direction, they sacked the Capitol building; murdered one police officer; injured multiple others; and killed at least three of their own rioters.

In comparison, Arnold’s treachery simply involved surrendering West Point, NY, to the British. He too, failed by the narrowest of margins.

Still, to put it into historical perspective, General George Washington called Arnold's treason, “Treason of the blackest dye”, because during the Revolutionary War, “…holding West Point meant preventing the British from controlling the Hudson River and dividing the colonies in two.” George Washington called the fortified site “the most important Post in America.” Loss of West Point could have spelled loss of the revolution.

The consequences of Trump’s treason have yet to play out. His supporters have “drunk the cool aid” and lost all sense of reality. They are adrift in a gaslighted, twisted, “alternative universe” of doublespeak and doublethink, where right is wrong and wrong is right.

Over the past years they have slowly stewed, like the proverbial frog in the frying pan, in an endless blizzard of lies and fringe-wing propaganda plus a concoction of religious insanity, which they call "Christian", but is in fact totally opposite of the teachings of Jesus Christ.

For them Trump has become a divine instrument, the voice of God, if not God himself.

Yes, treason most heinous, inflicted on our nation by a man masquerading as president, has wounded us most grievously, if not fatally. Convalescence will require a colossal effort on our part, through a multitude of disciplines, if we are to recover.

41 minutes of fear: A video timeline from inside the Capitol siege

"Just above and behind him (the insurrectionist with the Confederate flag) is a painting of Charles Sumner, the ardent abolitionist senator from Massachusetts, (and) a portrait of John C. Calhoun, partially obscured by the rebel flag, senator from South Carolina and vice president under both John Quincy Adams and Andrew Jackson, who wrote in 1837:

'I hold that in the present state of civilization, where two races of different origin, and distinguished by color, and other physical differences, as well as intellectual, are brought together, the relation now existing in the slaveholding States between the two, is, instead of an evil, a good—a positive good.'”

Please go here for Clint Smith's story in The Atlantic about the portraits, the capitol, the rebel flag and the Trump insurrection connection.

America, we have a challenge we must now confront.

The Trump initiated Capitol Hill Insurrection has forced us to choose to become the USA we pretend to be or remain the white racist society we deny we are.

Only the days ahead will reveal our choice.

What happens after the Capitol attacks? | Alexandria Ocasio-Cortez

Congress must vote to impeach and remove Donald Trump.

This isn't a complicated vote. It's a matter of right or wrong.

You're either with the People or you're with that mob. 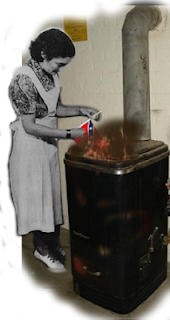 Officer Eugene Goodman was and remains the right man in the right spot at the right time. He is a hero not just because he chose not to use deadly force, but because he courageously stood alone before a mob of Trumpist-rioters, then risked bodily harm and/or death while summoning-up his intelligence and experience to distract them away from the US Senate chamber’s open door.

“Above and Beyond”... Officer Goodman; you are my hero. Your service in defense of our Constitution brings tears of gratitude to my eyes.

Hero Officer Led Mob Away To Save Lives During Capitol Riot