Ah... about Draining That Swamp... 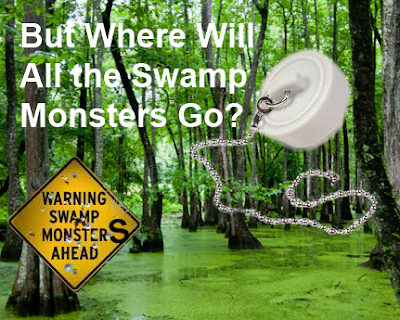 Given the team self-professed, federal-government-dismantlers which Mr. Trump is appointing to his cabinet, we can expect an unrecognizable USA to emerge in short order as these Republican nihilists murder what little humanity exists in our government. It won’t take them long because they are literally drooling like a pack of starving hyenas ready to rip apart and “privatize” our meager consumer protections and miserly human services.

But, the real question is: How long before the flyover-state Trump supporters realize that they have been duped into believing he will make their America great again?*

After all, we already know he wasted no time making his America greater. Right from the get-go he has been monetizing the power of the presidency into his bank account.**

Interesting isn’t it? Mr. Trump seems determined to drain the “swamp”, just like he promised on the campaign trail. But, no one thought to ask him the follow-up question, “Where will you put all those nasty swamp monsters?”

Now, we know. He’s appointing them to his cabinet and other top level federal jobs.


* Already a Big Gap Between Trump’s Promises to the Middle Class and his Policies, Josh Bivens, BillMoyers.com, 28 Nov 2016.