Protecting Us from Our Police

Each day we learn that more American citizens have been murdered by our police. We must put a stop to this carnage by reforming policing in the United States. I have discussed this on DownriverUSA several times. Here are two posts:

What Has Been Done?

Crisis Assistance Helping Out on the Streets (CAHOOTS). CAHOOTS works for citizens and for local government by reducing police brutality while also saving the city about, “$8.5 million in public safety costs every year, plus another $14 million in ambulance trips and ER costs”.

Basically, CAHOOTS created a response unit comprised of medical personnel from a local medical facility, most likely a hospital, which is dispatched by the local police dispatcher, to deal with nonviolent/non-sworn-officer-required 911 calls, such as, “unsheltered people or those with mental health issues”.

As Eugene Police Chief Chris Skinner explained, "We need to get law enforcement professionals back to doing the core mission of protecting communities and enforcing the law, and then match resources with other services like behavioral health -- all those things we tend to lump on the plate of law enforcement."

Some federal authority must oversee, license, require continuing education and psychological testing for police officers throughout the U.S. That oversight must also include ICE, FBI, alcohol and drug enforcement, U.S. Marshalls, etc. – police officers at all levels of government - anyone authorized to wear a badge and carry a gun. Please see: Outraged Yet? - 13 Apr 2021.

Every American ciizen must wear a body cam and mount an in-vehicle dash cam. Cams are inexpensive and nearly ubiquitous now. Video and audio records will offer some proof of deadly encounters with police.

Who Will Protect Us from Ultra-Right Policing Abuses? – The Humanitarian Corps

The recent CPAC conference clearly displayed a brazen neo-Nazi connection that should alarm all Americans.

Who Will Protect Us from Ultra-Right Policing Abuses?

We must create a "Humanitarian Corps", a new type of Special Weapons And Tactics (SWAT) unit of the National Guard, under command of the U.S. military, with the mission of “quick response” to protect and defend government units and the people who are victimized by Republican disenfranchisement… those subject to police brutality; those predominantly non-white Americans who cannot depend on their local police or state or even federal law enforcement, to be treated with common decency under the law; and those victimized by our for-profit prison system.

An additional mission would be providing humanitarian relief, education, and training, in situ, to the millions of unemployed, homeless, despairing, Americans who are mired in a never-ending cycle of poverty. Consider this a new form of FDR’s CCC-style employment programs, akin to an updated “Domestic Marshall Plan”.

As a past service person, I have faith that our military command will get the job done forthwith, in an efficient and evenhanded manner, under the Constitution, under Congressional oversight, using the equipment, personnel and material, as approved by Congress.

Through the Humanitarian Corps, funded under the existing Dept. of Defense budget, we may steer the course of America away from unending inhumanity to itself and toward a more humane world – for all of us.

The military, after all, has ships, planes, manpower, and the command structure at the ready. All that is required is the order to spring into action and get the job done.

What could comprise The Humanitarian Corps?

We may never be able to defeat the "powers that be – the funders of Republican treason". Still, we can help some of those left in misery due to our systemic failures. For me, "No one left behind", includes the civilians we displace, leave to starve, and die of their wounds - wounds our system permits - e.g., unemployment, poor education, no health care, inadequate housing, poverty, etc. We have the means to change the course of history by allowing our "better angels" to come forward and do what needs to be done to ensure that our Democratic Republic survives the next coup attempts sure to come.

We can do something different today because we have the wherewithal to profoundly change what will happen to people who are truly hurting because of Republican sponsored domestic terrorism, white supremacy, racism, and outright treason. By doing so, by taking a different path, we can stop our national free fall into fascism.

This can be a new and unexpected counter to the Republican Party, ultra-right, Trumpian authoritarianism, one somewhat akin to the post-WWII Marshall Plan, but vastly more focused on individuals over industry and government.

We can do this by creating a solution: The Humanitarian Corps.

To help move us forward, the concept below is an excellent step… A federally-funded, Police Holster Sensor and Use Report 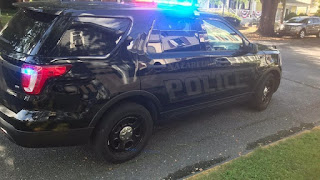 Have you given a thought to what happens to people when the police arrest them during a protest?

Well, the British newspaper, the Guardian, did the research and discovered the following:

“At least 90 percent of charges against Black Lives Matter protesters in a dozen jurisdictions have been dropped, dismissed or not filed, according to an analysis by The Guardian. Such a high percentage suggests that the police may have been arresting people simply to suppress dissent.”

“The extremely high percentage of protest-related charges ultimately being dropped or dismissed suggests that police may have been using arrests as a tactic to prove that the protests were unruly and unlawful.”

Despite this clear record of outrageous, authoritarian police abuse, Republican-dominated state legislators, such as Florida, “…are filing a stunning number of anti-protest laws. Some bills criminalize protesting in what appears to be a stark infringement of First Amendment rights to assembly and freedom of speech that the right wing pretends to revere. Others propose legal protection for people who run over protesters with their vehicles or shoot them.”

In fact, one current Trump-wannabe, Gov. Ronald DeSantis of Florida, crowed this as he signed Florida’s version of the First Amendment-burning travesty while wrapping an ultra-right Republican ribbon around a slew of other minority-suppressing dreams, including:

Florida’s new law, and those other Republican-controlled states are adopting, are clear harbingers of future ultra-right authoritarian rule as well as high-protein food for those like-minded authoritarian police officers throughout the nation. You know them as those clad in military gear, driving blacked out SUVs, armed with the latest weapons and wearing badges. The same “law enforcement” people who are also most likely to shoot a black person for being black, as well as others, regardless of race, for not following their commands, especially if that person is also obviously not wealthy.

With all this Republican Party talk about their Anglo-Saxon heritage, keeping America “white”, the "America First" caucus, and working so hard on being a white nationalist, fundamentalist-Christian party, I hope someone reflects for a moment or two on this question:

Who is it who punched their salvation ticket for eternal life?

Why, it was Jesus. Was it not?

And was Jesus an Anglo-Saxon? Well, no.

We passed outrage years ago.

Honestly, it is time to create a federal standard test for the police class people.

We need to know before they become cops if they will behave ethically and follow the law when they put on a badge and strap on that sidearm.

Do they like people or do they hate people?

Do they have serious psychological disqualifications?

Are they control freaks?

We need to know.

We must not continue to empower these predators, those who fail the test, with life-taking, abuse-inflicting freedom to roam our streets.

We need to know.

Some federal authority must oversee, license, require continuing education and psychological testing for police officers throughout the U.S. That oversight must also include ICE, FBI, alcohol and drug enforcement, U.S. Marshalls, etc. – police officers at all levels of government - anyone authorized to wear a badge and carry a gun.

We must put a stop to police lawlessness and abuse today.

He homers on the first pitch of his MLB career. pic.twitter.com/JKI5goelHQ

I grew up in Ohio, but I guess I was always a Detroit Tigers fan at heart.

Akil Baddoo cleared that up for me.