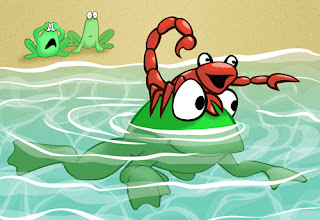 "It's not a blind trust if you and your siblings are still running the company."
-- George Stephanopoulos to Donald Trump, Jr. on "Good Morning, America" in September

"You're running the company, and he's president, so any foreign..."
-- Stephanopoulos

"But he's not making any decisions as it relates to the company."
-- Trump, Jr.

"But it's not a blind trust if it's being run by his children."
-- Stephanopoulos

"He's still going to know what the businesses are, and where they are...
-- Stephanopoulos

"No he won't. We're not going to discuss those things. It doesn't mattter. Trust me."
-- Trump, Jr

And, they say he's the intelligent one... RB

Go to Doonesbury for more Say What? Stuff.

Go here for the complete frog and the scorpion story.