Who Is Messing with Your Mind

Just as I was gettin' comfortable with knowing that most of the COVID stuff is social media disinformation and old-fashioned FAKE news/videos, I learn that there's a 50/50 chance that I'm readin' stuff generated by Robby Robot's Greatgrandkids - not even by Mr. Trump's human campaign staff.

Oh, how low can they go? We now know... really, really, deep, deep down, now that the king of Republican character assassins, Karl Rove, has joined the campaign.

"Jevin West, who runs the Center for an Informed Public at the University of Washington, told Vice last month that the “real goal” of COVID-19 disinformation campaigns is “about creating distrust in the overall ecosystem and institutions. It’s not so much about picking a side as it is about creating confusion and doubt and distrust of authority.”

"For a deeper dive in what Carley’s team is doing, check out the video below based on research gathered through early April:"

Bots Are Likely Responsible For Nearly Half Of COVID-19 Tweets, Say Researchers, Mary Papenfuss, huffpost.com, 24 May 2020.

Many of them are promoting fake cures, spreading conspiracy theories and pushing to “re-open America.”

Nearly half of some 200 million tweets about COVID-19 likely came from bots, with many of them plugging false cures, peddling conspiracy theories and clamoring for the U.S. to drop safety measures in order to re-open America, researchers have found.

Ongoing research by computer scientists at Carnegie Mellon University indicates that a significant portion of the social media conversation about COVID-19 is likely automated amplifications of political perspectives and do not represent individual human authors.

The study has reached no conclusion about which interests may be primarily responsible for the bots, but many of the messages are repeating information from Russian and Chinese state media. During the 2016 presidential election, computer operations linked to the Kremlin were found to be responsible for campaign tweets and other messages that further divided the American electorate by amplifying controversy.

*I remember watching Forbidden Planet, the 1956 science fiction movie at our neighborhood theater, The Ellet, in Akron, Ohio. Robby was one of the good guys in the film. Dr. Morbius created him to be servant. Robby had a dry wit about him and was fantastically smart as well as physically strong. All characteristics I admire. Most importantly, he was programmed against killing or hurting humans – programming modern bots lack. More about Robby. 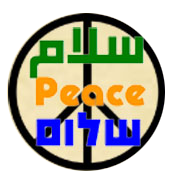 Jesus.
We need to hear that message of peace today.

Unearthed in 1986 after a long drought in Israel. Two brothers from the local Kibbutz were exploring along the shores of the Sea of Galilee. To their surprise and excitement, they stumbled upon what has become one of the greatest archaeological discoveries in history—a fully intact First Century Galilean fishing boat. ”Unearthed” will re-visit the initial discovery and excavation of this amazing boat, with archived footage and recent interviews with the two brothers who made the remarkable discovery. 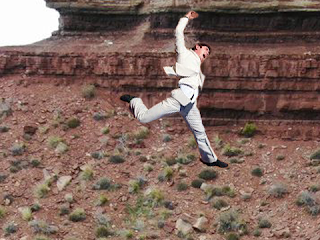 What does 100,000 deaths buy?
How about more unemployed Americans than during the Great Depression?
Or, millions of Americans without even the pennies to buy milk for their babies or a trip to the doctor?

Entropy. That is what we have bought.

That is what we now have under Mr. Trump's administration.

Disorder of the most spectacular degree.

Just as a generation obliterated itself rushing headlong into blazing machine guns during WWI, we too, are rushing, arms and legs akimbo, downhill toward our ultimate destruction.

God Save Us, please, from ourselves as we all stumble on, doing nothing to stop our mass suicide.

Here's how we got to this point... Leadership...What leadership?
This stunningly detailed timeline of Trump’s failures shows America’s coronavirus crisis was a man-made disaster

And, this:
Hypocrisy Abounds and so does "presidential voter lawbreaking
Trump’s Florida voter registration trips ups his Mar-a-Lago plans

Plus, this:
Trump: Letting Big Corporations Get Away with Whatever They Want
by Ralph Nader 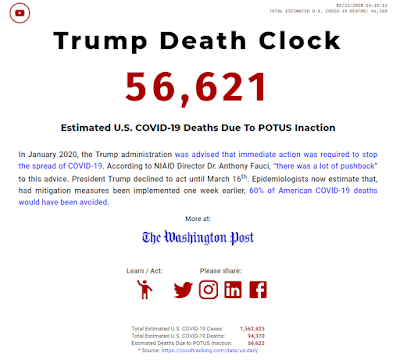 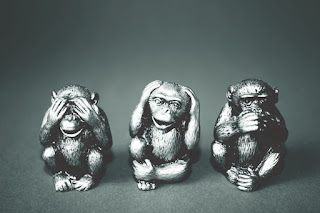 Finally, someone is saying the truth. Why aren't you?.

The "conservative Republican" Lincoln Project is saying the TRUTH you should have been saying, too. Are you going to accept 3,000+ deaths per day just because Trump is a total incompetent and a psychopath?


The Lincoln Project
Donald Trump’s failed presidency has left the nation weaker, sicker, and teetering on the verge of a new Great Depression.


What is needed today, yet remains as elusive as time itself?

Every day, in the era of Trump, we struggle between virulent ideology and uncommon sense. Each day brings more deaths due to incompetence and one of mankind's most often sounded ideological excuses for inhumanity, "...it's us vs. them".

It has been 50 years since Ohio National Guardsmen murdered four and wounded nine unarmed students on the campus of Kent State University. Please go here for the story: When Demagogues & Incompetence Rule Innocents Die.

It is 50 years later, and we are still sacrificing our children to the god of "us vs. them" as John "Derf" Backderf's recent graphic novel, Kent State: Four Dead in Ohio, depicts.*

It is shocking to realize how we have ended up back where we started in 1970.

Back then, we were a nation deliberately manipulate and divided by politicians wielding their “us vs. them” weapon. The war in Vietnam had gone on for years well before Nixon’s extension into Cambodia. It was that “illegal” addition to the American blunder in Southeast Asia that led to student protests throughout the nation, including Kent State.

Protesting for an end to the war was conflated by the Nixon administration and Republican Party supporters as an attack on the ‘Silent Majority”, the “blue- and white-collar workers the "Forgotten Man of American politics" and on Americanism, the mainstream “us vs. them” philosophy of the time.

Sounds markedly like, Make America Great Again, does it not? That is because it is. It is just recycled “us vs. them”.

KSU "closure" will finally begin when, together, the student body, the Kent State University administration, the State of Ohio and the people of Kent, Ohio, bring back to campus George Segal’s statue, In Memory of May 4, 1970: Kent State - Abraham and Isaac.

Segal was commissioned in 1977 by KSU to create a memorial statue honoring the 4 May 1970 tragedy. But, in 1979, his work was refused by KSU administration as "too violent".

KSU needs to hold the memorial statue's dedication ceremony along with a Native American smudging or “cleansing”. Both of which should have been done back in 1979. It would be a major step forward for KSU, Ohio, the United States and humanity. It will help us confront one of our deepest, darkest truths: our national willingness to sacrifice our youth. When we do, perhaps, we will free ourselves of that terrible, haunting demon.

Segal’s, In Memory of May 4, 1970: Kent State - Abraham and Isaac can be found displayed outside of the Princeton University Chapel. This description is attached to it:

The artist depicts contemporary versions of Abraham and Isaac in an allegory for the May 4, 1970, tragedy at Kent State University. A poignant visualization of humankind's struggle between ideology and paternal love, it mirrors the conflict that led to the death of four students at the hands of the Ohio National Guard. Though Abraham looks poised to strike his son, the artist emphasized that Genesis 22 ends without tragedy, as Isaac is spared.

I hope that it works out that way for us today, the Genesis 22 way, and we spare our children the inevitable tragic outcome of a USA once again driven by "us vs. them".

Until then, I will be looking for the KSU – our USA - smudging ceremony, offering this prayer: 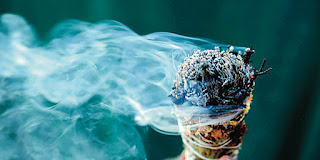 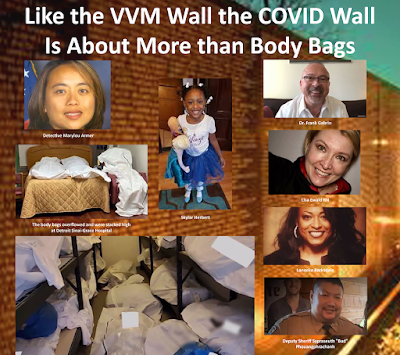 With the dead numbering more than 60,000 and more than 1 million sickened, we have now amassed more unnecessary deaths from COVID-19 in four short months than the 10 years of the Vietnam War.

Sadly, we as a nation have learned nothing over the intervening 50 plus years. We stand mute and idle while the President of the United States orders workers to risk sacrificing their lives and the lives of their loved ones to make pork chops. Like the Vietnam War draftees who were sacrificed to make a psychopathic, disgraced President successful, our COVID-19 victims have died as a result of a big lie and leadership incompetence.

We are still willing to sacrifice "others" in order to continue with our American Life Style.

Everyone of the 61,000 plus were living people, with family and friends. They had lives. They loved and were loved. Now they are gone. Needlessly.


*https://www.nbc12.com/2020/04/15/graphic-bodies-stored-vacant-rooms-detroit-hospital-overwhelmed-by-coronavirus/
Posted by Ron Baker at 11:14:00 AM No comments: Links to this post