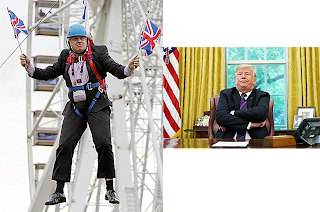 The Buffoons Rule the U.S. and the UK.

Peanuts? Popcorn? How about coney dog with your Bud while you watch the clowns perform?
Posted by Ron Baker at 8:56:00 AM No comments:

Email ThisBlogThis!Share to TwitterShare to FacebookShare to Pinterest
Labels: buffoons 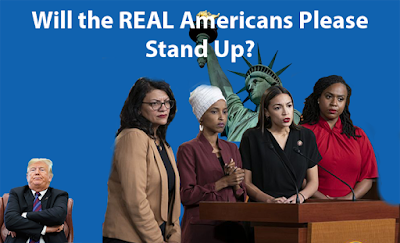 Real Americans have always stood up to bigots. The question is will the rest of us stand up now?
Posted by Ron Baker at 8:07:00 PM No comments: 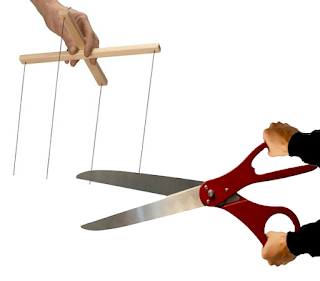 "So long as the oligarchy divides Americans – split off people of color from working-class whites, stoke racial resentments, describe human beings as illegal aliens, launch wars on crime and immigrants, stoke fears of communists and socialists – it doesn’t have to worry that a majority will stop them from looting the nation."

"Divide-and-conquer allows the oligarchy free rein. It makes the rest of us puppets, fighting each other on a made-up stage."

Personally, I prefer no strings attached. Thank you very much.

I keep hearing that the Democratic party has moved “left” and that some Democratic candidates may be “too far left”.

But in this era of unprecedented concentration of wealth and political power at the top, I can’t help wondering what it means to be “left”.

A half-century ago, when America had a large and growing middle class, those on the “left” sought stronger social safety nets and more public investment in schools, roads and research. Those on the “right” sought greater reliance on the free market.

But as wealth and power have concentrated at the top, everyone else – whether on the old right or the old left – has become disempowered and less secure.

Safety nets have unraveled, public investments have waned and the free market has been taken over by crony capitalism and corporate welfare cheats. Washington and state capitals are overwhelmed by money coming from the super-rich, Wall Street and big corporations.

So why do we continue to hear and use the same old “right” and “left” labels?

I suspect it’s because the emerging oligarchy feels safer if Americans are split along the old political battle lines. That way, Americans won’t notice they’re being shafted.

In reality, the biggest divide in America today runs between oligarchy and democracy. When oligarchs fill the coffers of political candidates, they neuter democracy.

The oligarchs know politicians won’t bite the hands that feed them. So as long as they control the money, they can be confident there will be no meaningful response to stagnant pay, climate change, military bloat or the soaring costs of health insurance, pharmaceuticals, college and housing.

There will be no substantial tax increases on the wealthy. There will be no antitrust enforcement to puncture the power of giant corporations. No meaningful regulation of Wall Street’s addiction to gambling with other peoples’ money. No end to corporate subsides. CEO pay will continue to skyrocket. Wall Street hedge fund and private equity managers will continue to make off like bandits.

So long as the oligarchy divides Americans – split off people of color from working-class whites, stoke racial resentments, describe human beings as illegal aliens, launch wars on crime and immigrants, stoke fears of communists and socialists – it doesn’t have to worry that a majority will stop them from looting the nation.

Divide-and-conquer allows the oligarchy free rein. It makes the rest of us puppets, fighting each other on a made-up stage.

Trump is the puppet master.

He has been at it for years, long before he ran for president. He knows how to pit native-born Americans against immigrants, the working class against the poor, whites against blacks and Latinos.

He is well-versed in getting evangelicals and secularists steamed up about abortion, equal marriage rights, out-of-wedlock births, access to contraception, transgender bathrooms.

He knows how to stir up fears of brown-skinned people from “shitholes” streaming across the border to murder and rape, and stoke anger about black athletes who don’t stand for the national anthem.

He’s a master at fueling anxieties about so-called communists, socialists and the left taking over America.

He can make the white working class believe they’ve been losing good jobs and wages because of a cabal of Democrats, “deep state” bureaucrats and Hillary Clinton.

From the start, Trump’s deal with the oligarchy has been simple: he’ll stoke tribalism so most Americans won’t see CEOs getting exorbitant pay while they’re slicing the pay of average workers, won’t pay attention to Wall Street demanding short-term results over long-term jobs, and won’t notice a boardroom culture that tolerates financial conflicts of interest, insider trading and the outright bribery of public officials through unlimited campaign “donations”.

The only way to overcome the oligarchy and Trump’s divide-and-conquer strategy is for the rest of us to join together and win America back.

That means creating a multi-racial, multi-ethnic coalition of working-class, poor and middle-class Americans who will fight for democracy and oppose oligarchy.

This agenda is neither “right” nor “left.” It is the bedrock for everything else America must do.