One more reason to Wear "M" for Michigan 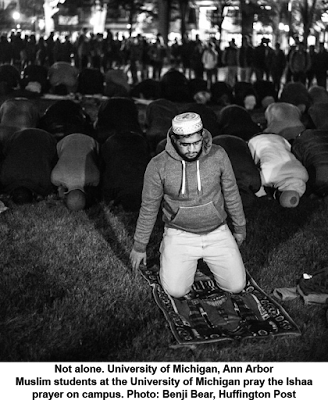 A staggering number of hate crimes are sweeping the USA now that Mr. Trump’s team is making ready to take over the presidency. “Anti-anybody-but-white” diatribes spray-painted on churches, mosques, school buildings and public places are becoming common. Sadly, reports of school children acting out in their best imitation of Trump-inspired-bullying are a common occurrence, too.

No one knows how far down we will degenerate as a nation. But with talk of creating Muslim internment camps, the signs are clear that we could quickly descend very low into our despicable past with a recreation of one of our WWII era, crimes against humanity.

But there is a strong movement coalescing against the hatred, bigotry and outright criminal acts we are witnessing.

An example… from the campus of the University of Michigan, Ann Arbor:

“In outright defiance of the rising levels anti-Muslim hate in America, University of Michigan students joined forces on Monday to protect their own.”

“After hearing that a Muslim student had reportedly been threatened for her faith, hundreds of students and faculty showed up to stand guard around classmates who had gathered in a main square to perform one of Islam’s five daily prayers.”

“But Ali wasn’t expecting such a strong and substantial turnout, from the Muslim community and from allies.” 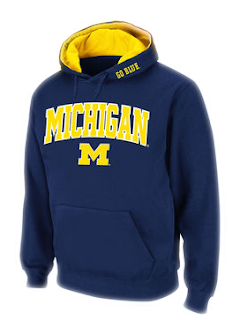 “Hundreds and hundreds of people came out for both prayer and showing their support,” Ali wrote. “The amount of support was overwhelming and absolutely wonderful, and it brought some ease to the Muslim students [and] showed that we have other individuals who are willing to stand with us.”

I always knew there were a multitude of reasons to wear “M” decorated clothing. But, now there’s an even more important reason… showing support for the people who, like their ancestors, stand for and help guarantee the natural rights of their fellow citizens.

Now, this is the USA I believe in.