What Does It Take? Here's One Idea

Often we are so occupied with thinking nothing can be done; that all the innovation and new ideas are created somewhere else... anywhere else... but not here in the USA. The following is a report about a game-changing innovation which may very well be the spark that ignites a new industry which could employ millions and help give us the energy independence we so desperately need.

Researchers at MIT have found a way to make significant improvements to the power-conversion efficiency of solar cells by enlisting the services of tiny viruses to perform detailed assembly work at the microscopic level.

In a solar cell, sunlight hits a light-harvesting material, causing it to release electrons that can be harnessed to produce an electric current. The new MIT research, published online this week in the journal Nature Nanotechnology, is based on findings that carbon nanotubes — microscopic, hollow cylinders of pure carbon — can enhance the efficiency of electron collection from a solar cell's surface.

Previous attempts to use the nanotubes, however, had been thwarted by two problems. First, the making of carbon nanotubes generally produces a mix of two types, some of which act as semiconductors (sometimes allowing an electric current to flow, sometimes not) or metals (which act like wires, allowing current to flow easily). The new research, for the first time, showed that the effects of these two types tend to be different, because the semiconducting nanotubes can enhance the performance of solar cells, but the metallic ones have the opposite effect. Second, nanotubes tend to clump together, which reduces their effectiveness.

And that’s where viruses come to the rescue. -more-
Posted by Ron Baker at 7:14:00 AM No comments:


Tie up, have lunch, pick up a missing tool or part, at the Grosse Ile Public Dock, East River at Grosse Ile Parkway. 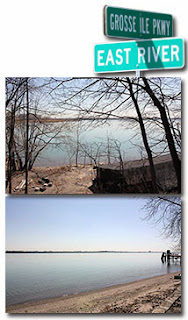 We welcome visitors to Grosse Ile.

Some come by SUV or car, some bike and some drop in by plane. But, none arrive by boat. That is to say, none of our friends can stop by, tie up and enjoy lunch or a cool drink at our Macomb Street businesses off East River. Why? Because there is no public dock facility available.

Today, we have an opportunity to create one. Prime property off East River Road at Grosse Ile Parkway has become available to the Township.  You’ve driven by a million times. If you are a longtime Islander, it’s likely you dropped a line into the river at this spot and enjoyed the spectacular view.

It’s time to turn this neglected beach into a spectacular public area, put in a dock for our boating and sailing friends, and welcome them to their new home on Grosse Ile!
Posted by Ron Baker at 12:33:00 PM No comments: