As the Sioux Say, Mini Wiconi — ”Water is Life” 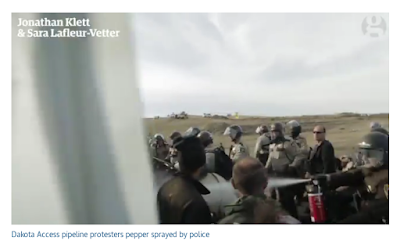 Many years ago someone on my father’s side of the family fought on the American side of the Revolutionary War.

As the story goes, the colonies won some of the fightin’ and eventually independence from King George, as well.

Many of those who did actually participate in the fightin’ were supposed to be paid for their services. But after the British went home, Congress, similar to our representatives today, decided to shortchange the very people who actually fought the battles to win independence by withholding their rightful pay.

Years later, Congress did get around to paying their veterans, but not in cash. Congress gave some of the Vets title to Native American land in the Ohio Territory as payment for their service in the War for Independence.

Nothing has changed since those days, except, maybe, Congress’ skill level. Today our reps are even more expert at double-dealing and fleecing. Only the amounts fleeced are a great deal more than back in the early 1800s.

As for the double-dealing skills, our leaders have become outstandingly adept. For instance, they have signed a multitude of “treaties” with Native Americans and broken most — if not all — of them when it was convenient and profitable to do so for the “white” business people, politicians and settlers.

At every turn of our twisted, broken-treaty path, “profit” was realized by forcing Native Americans from their lands so that exploiters could control natural resources, i.e., gold, water, mineral rights, railroad right-of-way or land for white people to farm.

Not only were treaties broken or land stolen outright, our politicians approved or looked-the-other-way while our Army  and / or white gangs killed thousands of Native Americans in “battle” and slaughtered thousands more of defenseless women, children and elders in a multitude of massacres.

Today, we have added one more chapter of heinous crimes against humanity to the USA History Book of Atrocities: Standing Rock.

“Thousands of Native Americans and their allies have gathered on unceded Sioux land delimited by the 1851 Treaty of Fort Laramie to try and stand in the way of the “black snake” that could poison the Standing Rock Reservation’s water supply. Many have noted that the pipeline corridor was repositioned from its original route north of Bismarck after white citizens spoke up against the threat a spill would pose to their drinking water ― a threat duly recognized by the U.S. Army Corps of Engineers. Yet the Corps failed its federal mandate for meaningful consultation with the Standing Rock Tribe before signing off on a route that moved the pipeline to their doorstep.”
A #NoDAPL Map, This pipeline could endanger the drinking water of millions,
Carl Sack, Huffington Post, 2 Nov 2016.