Below is the message we needed to hear from the President of the United States.
Thank You, Pres-Elect Biden. 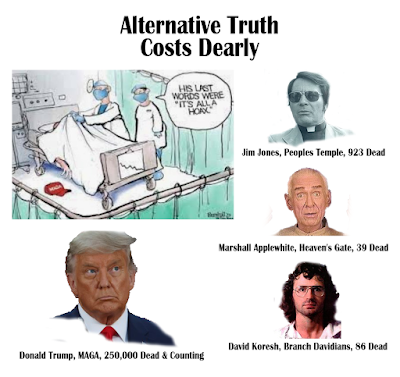 Mr. Trump’s COVID-19 “Alternative Truths” have not worked out so “well” for more than 250,000 (and counting) Americans who have died of the uncontrolled virus.

Still, while the U.S.A. is now racking up 1,100 COVID deaths each day, many of his believers continue to proclaim the whole COVID thing a “hoax”.

Perhaps one day a few Trump-believer relatives might ask out loud, "Why did you follow that man into your grave?"

“Their last dying words are, ‘This can’t be happening. It’s not real.’ And when they should be... Facetiming their families, they’re filled with anger and hatred.” pic.twitter.com/tgUgP6znAT

Time to Make Society Work - For Us 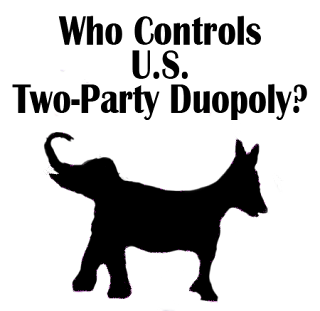 Mr. Biden will be sworn as President of the United States in late January 2021.

So, what happens for us after that?

Will the Biden government become just like the other Democratic Corporatists? Will they, too, be dishing out the same old, same old B.S.? Will life improve for millions of Americans? Or will it be just more and more for the .01%, the corporate "C" suite people and their minions and less and less for the millions of us?

How do we make change for the better happen for us?

It's way past time to create an alternative party to ensure that the interests of the people of the United States are honored; that a new "green" economy is created and implemented; that healthcare for all is implemented; that our national infrastructure is rebuilt - modernized - creating life-sustaining employment for our people; that we end our imperialistic, heinous dependency on war; that our predatory capitalist system be directed to reward those who serve mankind rather than those best at swindling the poor and politically powerless.

We need a powerful political force to ensure the “American Dream” happens for all of us, not just for the wealthy and powerful, tiny, tiny few - the masters of the American two-party duopoly.

The two major parties aren't as different as you think they are. Democratic and Republican voters are more divided than ever, but that's not the case for elected officials. In this episode, we'll discuss the similarities between the two major parties, and consider whether trying to build a competitive third party would make a difference.

When the election chaos ends and Mr. Trump becomes a private citizen, he will be prosecutable for his alleged crimes, just like every other U.S. citizen.

But most certainly, those most likely to be brought upon his leaving the protection of presidency, will be served by The State of New York. That means Mr. Trump could be the, “first former president in American history to find himself on trial — and perhaps even behind bars”.

So, what will he do?

I predict he will run.

Yes, he will exit the USA for political asylum rewarded by another authoritarian dictator, Mr. Vladimir Vladimirovich Putin of Russia.

Mr. Trump knows he is guilty of many crimes and unless he can escape, he will serve time in jail.

I believe he is a traitor for seeking and accepting Russian interference in the 2016 election, and working to weaken the NATO Alliance, as well as turning his face away from Russian bounty-paying in Afghanistan for dead U.S. and NATO troops. Like another before him, Mr. Benedict Arnold, he will seek shelter with his benefactor. In his case, that means Russian dictator, Mr. Putin.

Former National Security Council member General Barry McCaffrey and former special presidential envoy for the Global Coalition to Defeat ISIS Brett McGurk on why they believe the national security process is broken amid reports the U.S. had intelligence that Russia offered and paid the Taliban bounty to kill U.S. troops. Aired on 6/30/2020.