Let’s take a look.
Here’s what I see from the Republican debates and Republican Congressional leadership’s recent declarations: In the name of reducing debt, they are calling for the elimination of every US social advancement and establishment of “every man for himself” simplicity. (A view of human social structure which I would argue has never existed.)

I sincerely believe they favor plunging us into a New Dark Age.

The New York Times summed it up in today’s (30 Sept 2011) editorial:
“(The Tea Party / Republican) program (is) to wind down the government’s longstanding guarantee of health care to the elderly and the poor and incinerate the Democrats’ new promise to cover the uninsured; to abolish the Department of Education and its effort to raise national standards; to stop virtually all regulation of the environment and the financial industry; to reimpose military discrimination against gays and lesbians, deport immigrants, cut unemployment insurance and nutrition programs, raise taxes on the poor and lower them for the rich.”

In my book, the Tea Party people and the Republican Party leadership have earned a new name: Neo-regressive. It’s more than obvious these people are looking backwards to undoing when we need leaders to look forward and doing.
Posted by Ron Baker at 6:03:00 AM No comments:

Blowin' In The Wind

Joan Baez will perform at the Michigan Theater, Ann Arbor, 7:30pm, 1 Nov 2011. I read this on the Ann Arbor Ark's website and memories flooded my mind.

A long time ago I was working nights at the University of Akron radio station. We played several versions of this song as well as other "protest" songs. I remember Joan Baez's beautiful voice and that I prayed we'd stop killing in Vietnam. My cousin was a POW, shot down over Hanoi. Some of my friends who had enlisted because they were going to be drafted anyway or out of misplaced patriotism or out of a desire to prove themselves, to ... who... themselves, I guess... never came home.

It was a time of active discontent. Students and many others protested the war in Vietnam, the draft and racial injustice. I remember during one final exam the building next door, the university’s main administration building, erupted into flames and the Ohio National Guard was called in to take back the campus from the BUS protesters. I failed t he exam. I couldn’t concentrate. However, it wasn’t all the fault of the fire or the fact that the professor wouldn’t let us leave the building when the fire alarms went off. The previous weeks I didn’t study as much as I should have for the exam. I was too busy becoming a broadcaster.

We student broadcasters did manage to get into trouble though. Someone protested our playing Jose Feliciano’s version of the National Anthem before a U of A football game. We were threatened with suspension if we didn’t stop playing it. Looking back, we just liked the way he sang. We weren't participating in the times nor were we trying to make the world a better place. Little did we know that the song would become the center of controversy. (See below.)

Today, Joan is still singing the same song and I am still praying we will find a way to stop killing. Go here for a portion of Joan's bio: http://www.joanbaez.com/chronology.html


"Puerto Rican blind singer/guitarist Jose Feliciano stunned the crowd at Tiger Stadium in Detroit, and the rest of America, when he strummed a slow, bluesy rendition of the national anthem before Game 5 of the World Series between Detroit and St. Louis. The 23-year-old's performance was the first nontraditional version seen by mainstream America, and it is generally considered the Lexington and Concord of Star-Spangled Banner controversies. The fiery response from Vietnam-weary America was not surprising, considering the tumultuous year for American patriotism. Good or bad, however, Feliciano's performance opened the door for the countless interpretations of the Star-Spangled Banner we hear today."
Posted by Ron Baker at 1:40:00 PM No comments:

So, who do you believe? Still thinking the Tea Party (aka "Pot" please see previous post below) people know what they are screaming? Or, are you thinking the President is right about healthcare? We are in this together and we'd best be paying for it at "one big USA group rate".

From today's New York Times: "The cost of health insurance for many Americans this year climbed more sharply than in previous years, outstripping any growth in workers’ wages and adding more uncertainty about the pace of rising medical costs. Go here for the rest of the story >>>

"And, God bless everyone!" said Tiny Tim. "Even the Tea Party (Pot) Republicans who aim to deny me healthcare because I am too poor. (The last portion Tim's quote can be attributed to RB. )
Posted by Ron Baker at 12:00:00 PM No comments:

I have lost friends due to breast cancer. Have you?

There may be some good news. This report comes from Pennsylvania State University, School of Medicine. I pray the findings make into the public domain ASAP!

"Scientists at the Penn State College of Medicine said this week they have discovered a virus that is capable of killing all grades of breast cancer "within seven days" of first introduction in a laboratory setting. The virus, known as adeno-associated virus type 2 (AAV2), is naturally occurring and carried by up to 80 percent of humans, but it does not cause any disease.

Many of my friends have fallen out of the middle class. They have lost good paying jobs, healthcare and even their homes. Many are college graduates, some with masters degrees. Now they face living through the winter without shelter and food, especially since the Republican Congress may not extend unemployment just to unelect President Obama. With no way to take care of themselves and their families what do you think they will do? What will you do when you can't buy food? Have you noticed how expensive food is today?

There is only one answer. We must pull together and help each other. Let me know if you'd like the bumper sticker posted above. (Click here for larger image, PDF.) If you still have a car, put it on it and let others know you are going to work to make a difference right now...

Jobs - How long have you been unemployed?
Homes - How much value has your home lost - if you still have a home?
Healthcare - How long have you been without healthcare?
Savings - Lost everything in the great banking/housing bust swindle?
Education - Can you pay to go back to school?
Security - Remember when you knew your paycheck would be there this Friday?
Retirement -Did your company or fund manager lose your retirement in the great banking/housing swindle?
Peace - Trillions for war, killing and maiming hundreds of  thousands  of people, but nothing but hardship for the American people

Please act to Take Back America NOW!  Call your political representatives and demand he/she work for you... the American people! RB
Posted by Ron Baker at 3:32:00 AM No comments:

Steve Jobs to Stanford Grads: Do What You Love - Stay Hungry

In 2005 Apple Founder Steve Jobs delivered a commencement address to Stanford graduates. "Your time is limited," he said. "So don't waste it living someone else's life. Don't be trapped by dogma, which is living with the results of other people's thinking."

Look, aren't you concerned enough by now to do something?  Lost your job, your retirement is gone, no healthcare... it's not only time to call the Republicans what they are but to do something about it. DEMAND JOBS NOW!!! WRITE, CALL, GO SEE your elected representatives TODAY!

After all, we are now fighting for our very lives.

It is no longer a political game to keep a blackman out of office. Today, you need to ask yourself these questions: Can you feed your family? Will you be able to keep your family in your home and warm this winter? If you aren't concerned about these basics by now, then you will be soon enough.

Because, I'll bet you're not one of the republican-protected super rich... that translates to less than 1% of the U.S. population who now have 23% of our natioanl wealth. And, that means 99% of us are real losers to one degree or another. The global, U.S. corporations are sitting on $2 trillion in cash. Where are they investing their U.S. shareholders money? What is the value of your home today? Can you get your home refinanced at a reasonable rate? Is anyone listening? Please, watch this short video by former Secretary of Labor, Dr. Robert Reich. 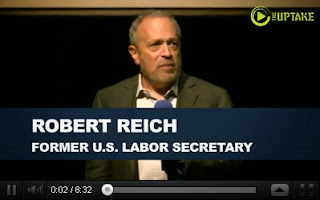 Robert Reich is Chancellor's Professor of Public Policy at the University of California at Berkeley. He has served in three national administrations, most recently as secretary of labor under President Bill Clinton. He has written thirteen books, including The Work of Nations, Locked in the Cabinet, Supercapitalism, and his most recent book, Aftershock. His "Marketplace" commentaries can be found on publicradio.com and iTunes.
Posted by Ron Baker at 9:10:00 AM No comments: