More to the Story, Part 2 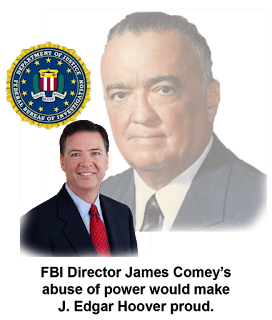 Yes, always. There is more to the story:

"But then this isn’t the first time for Comey to break with DOJ guidelines in the case. His press conference in July announcing that no charges would be brought, while excoriating Clinton for her handling of classified emails, was completely out of bounds. If the government doesn’t have the goods, it certainly doesn’t have the right to smear the subject of its investigation, which is essentially what Comey did with his statement and repeated inappropriate testimony before a partisan congressional committee."

"Some of us are anything but surprised. Liberals who lived through the ’90s and the endless Whitewater probe that went nowhere met President Barack Obama’s appointment of James Comey as director of the FBI with a primal scream of “Are you kidding me?” It was inconceivable that, just as former president Bill Clinton had foolishly appointed a Republican FBI director, Louis Freeh, who saw it as his primary duty to investigate a president he did not respect, a Democratic president was appointing a GOP lawyer to the same job 20 years later in an even more toxic political environment."

"At the time, everyone in Washington seemed to be very pleased with the choice, seeing Comey as a “straight shooter” without a political agenda. That was largely based on his dramatic congressional testimony about the night in 2004 that he and then-FBI director Robert Mueller raced to former attorney general John Ashcroft’s sick bed to stop the White House counsel Alberto Gonzales from coercing the ailing AG into signing an illegal domestic spying order."

"A lot of civil libertarians understood that to signify that the heroic Comey had been arguing the constitutional point, but he wasn’t. His concerns had been over a technical problem with the program’s legal basis. They fixed a few little details and Comey signed the order that month to keep the secret domestic surveillance program going for many years. A civil liberties hero he is not."