Refugees – Now More than the Entire Population of France 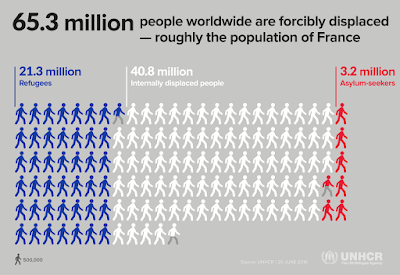 All these displaced persons -  the refugees – why?  Who, exactly, benefits from making displaced people?

Today, the misery caused by the ravages of war is much worse than ever before because it is never ending. Our wars have become continuous. So much so that, “one in every 113 people on earth is an asylum-seeker, internally displace or a refugee”.* Now totaling more than 65.3 million people, more than 51% of the refugees and displaced persons are children.

In fact, the number of refugees now exceeds those created during WWII… more than the entire population of France. 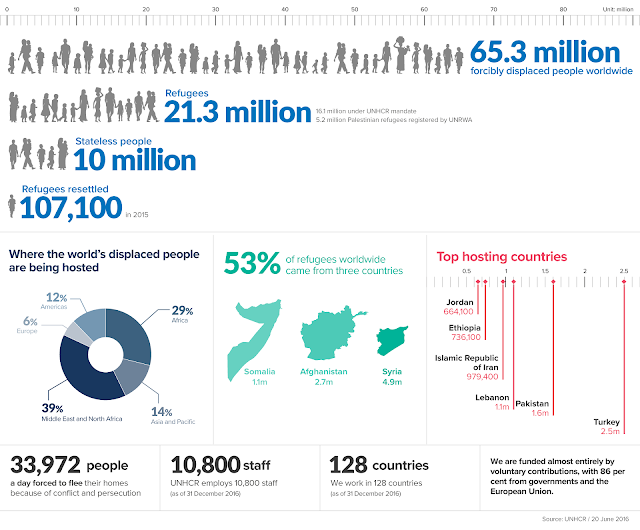 Yet the overwhelming reason people become refugees is because of war. The stream of refugees fleeing for their lives because of our wars has become never ending.

The answer to the refugee problem can not to be found internally within each western nation. No, the problem is much bigger than any nation’s xenophobic political party can solve. It’s an extra-national problem that is not solvable by building walls and security fences.

To eliminate our internal “immigrant” concerns we must go to the root of the problem and remove the reasons people become refugees or immigrants. Only then will the refugee / immigrant challenge all nations are facing be successfully resolved.

So, then what is the first step?

Well, first we must come to terms with who benefits from war.

Personally, I believe we must first determine which Americans benefit from war. Then take the political and monetary profits out of endless war making. Each nation must also do the same. 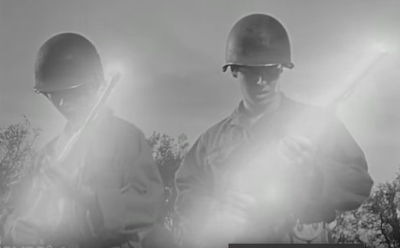 The other day I heard a Fox “News” personality say that the world had better watch out because, …"there’s a new sheriff in town". Of course, he was proudly describing Pres. Trump’s ordering missiles into Syria to blow up stuff in response for Syrian Pres. Assad’s alleged use of chemical weapons on his own people.

Suffice it to say that our President’s use of long distance bombing, especially without consulting neither members of Congress nor our allies, gives me flashback-headaches. I can recall several instances of our politicians using military strikes to deflect a multitude of various sins or foist an undeclared conflict upon us. In the end, perhaps many years later, we discovered that the supposed incident had never occurred.

Still, I do like the idea of a “new sheriff” patrolling the world and defending innocent people from degenerate and unmerciful evil in any form no matter from where it originates. 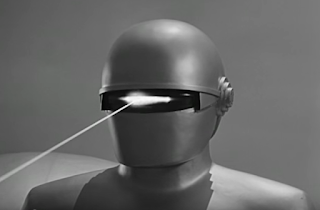 I also can cipher out that the “new sheriff” is certainly not Mr. Trump. However, I do remember such a sheriff. His name was Gort. He came from outer space and starred in the 1951 version of, The Day the Earth Stood Still.

Gort was the real thing. His peace keeping ability was unmatched because he could melt weapons without causing injury to the violent perpetrator. Now, that is unique and very cool.

That kind of peace keeping has a multitude of uses. For instance, we could create a protective system that causes a rifle, shotgun, or handgun to misfire when someone attempts to use it in a school, retail store or public place. That would be great wouldn’t it? 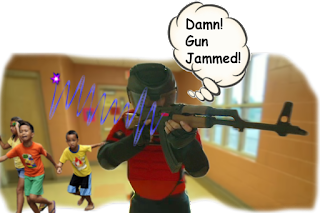 Go here for more about the Peace Tool 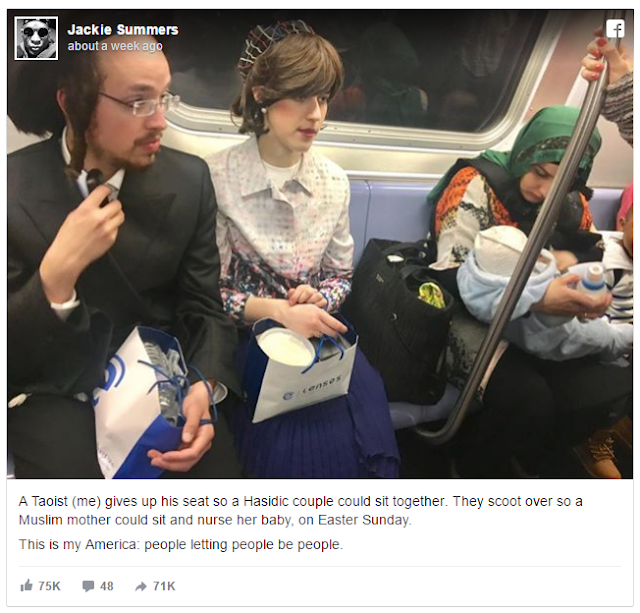 I saw this photo / post earlier this morning and wanted you to see it, too. For me it suggests the America I've grown to think is my own... accepting and protective of all people no matter their religious, ethnic or racial heritage. If one can somehow push the propaganda (alternative facts) aside and let your eyes see and your ears hear I hope you will uncover that we are at heart a life-affirming people.

Viral Photo From NYC Subway Captures America At Its Best

“This is my America: people letting people be people.”

On Sunday, native New Yorker Jackie Summers posted a photo on Facebook and Twitter that appears to show a Jewish man and woman sitting on a New York City subway car next to a Muslim woman in a hijab holding a baby.

The caption Summers wrote on Facebook reads: “A Taoist (me) gives up his seat so a Hasidic couple could sit together. They scoot over so a Muslim mother could sit and nurse her baby, on Easter Sunday. This is my America: people letting people be people.”

The Facebook post had garnered more than 75,000 reactions and 58,000 shares by Wednesday afternoon. People commented on the photo to celebrate the diversity that it reflects, and what that means for the country.

“THIS, is what makes America great and these days I’ve been struggling to find ways to feel good about America,” one person wrote on Facebook. “We, the people...Thank you for restoring a little of my faith in humanity today, Jackie.”

Please go here for the story:
This is my America: people letting people be people, Sarah Ruiz-Grossman, HuffPost, 19 Apr 2017.


In the past, many, including myself, have called one economic reform effort the Robin Hood Tax.
But today, that name misdirects attention away from our current wealth-gap, economic crises and unnecessarily conjures up the Merry Men and Robin Hood of English folklore. You know, the guys who went about "robbing from the rich and giving to the poor".

In the U.S. "robbing from the rich to give to the poor" brings a terrible taste to the mouth of most Americans, especially the R-people, who label it “wealth redistribution”. For them, it’s a bad thing. It’s a philosophy which most Americans have found offensive since the days the Puritan ancestors placed their feet on a rock near Plymouth, Massachusetts.

So, I’ve arrived at a new name. One I hope will please my compatriots. Please consider calling it the Robin Hood Tax the "Life-Affirming financial transaction sales tax". Or, simply adopt the acronym, “LAST”, for “Life-Affirming Sales Tax”.

Regardless, what we call it, the funds raised via this modern financial services sales tax could be used to solve a plethora of terrible problems created under our current wealth-gap, capitalist system, including: equalizing pay for underpaid homecare workers, eldercare workers, nurses, and nursing assistants, etc.

It also could fund life-sustaining medications, physical therapy, lost income due to surgical recovery, at-home meals, childcare, tutoring, job training and on-line education, among a billion other currently neglected issues which we must address in life-affirming ways.

The financial transaction tax is simply a sales tax on a trade of stocks, bonds, or derivatives. In fact, it’s just like the sales tax which most of us pay every time we purchase something, only we pay a lot more... like .06% on the things we purchase here in Michigan.

The financial services tax legislation already proposed by Rep. Keith Ellison (D-MN) and Sen. Bernie Sanders (I-VT ) would be in the order of 0.5 percent on stocks, 0.1 percent on bonds, and 0.005 percent on derivatives or other investments.

How much money are we talking about here?

According to Robert Pollin, co-director of the Political Economy Research Institute at the University of Massachusetts, Amherst, such a tax could raise as much as $340 billion a year over the next decade. Others, such as the Tax Policy Center have said the potential revenue would be less than one-tenth of that.*

Still, that’s a good amount to help get us moving down the life-affirming road. 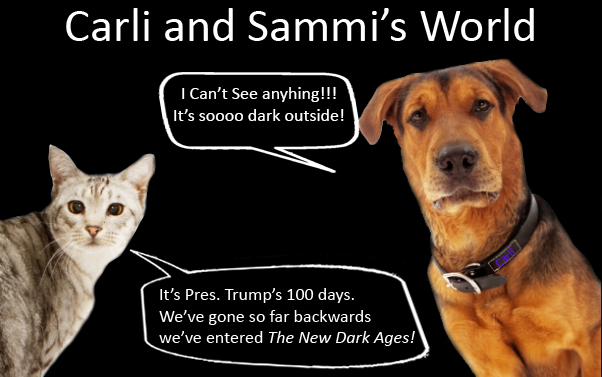 Sparking a Better Day for Detroit

Will it be possible to create a life-affirming community out of the ruins of one ripped apart by hatred and bigotry over decades of economic decline?

Pastor Aramis Hinds and a cadre of interfaith supporters believe they can do exactly that, commencing with building a “House of Healing” in a restored and repurposed Temple Beth El, and then melding it into the home of the Bethel Community Transformation Center.

Pastor Hinds explains, We intend to, “…create jobs, unite our fractured faith and racial communities, and inspire hope in a better day for Detroit.” *

“We want to bring the space back to life, and have it as a worship space and performing arts center,” says Pastor Aramis Hinds, whose church is one of the several organizations currently using the space. “Most importantly, this is going to be a place for reconciliation. The goal is to use this place as a catalyst for greater conversation across different religions and races alike, so that our community can heal and come together in a greater way. We want to use this building to tell the story of Detroit and the impact it’s had on (the city’s) history.” **


For as little as $5, you, too, can help. Please visit the Kickstarter website.

Who Hates Americans the Most? 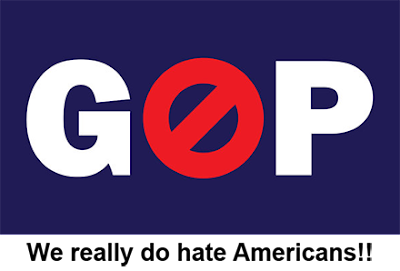 Often, we hear that so-and-so in some faraway place really hates us.

The story goes… they hate so much because we have democracy, McDonald’s, drive SUVs or have such a high standard of living. Whatever the reason, they really, really hate us! That’s why they are anti-American or even terrorists.

Have you ever wondered who actually hates Americans the most?

I’ve done a massive amount of research to cipher it out. And, you will be surprised because I’ve discovered something I never thought I’d find. I’ve uncovered that the people who hate Americans the most are… Americans! Yes, those very same people who proudly proclaim to be loyal Americans and steadfast defenders of the Constitution!

Of course, I had to extrapolate my findings by choosing from among those countless people from around the world whom we think will do us harm and only include those who have actually done or plan to do us harm. So, I concluded that only the harm-doers can be counted as the people who actually hate Americans.

The result? There is only one group… the Republicans… and only one person, in particular, President Trump… who qualify as American haters.

The proof? Well, just take a gander at the President’s budget and determine for yourself who is hurt the most.

Here are just a few highlights from Pres. Trump’s budget:


Oh, yes, there is something more… slash every federal department budget that has anything to do with protecting Americans from the outrages of predatory capitalism and air / water pollution. 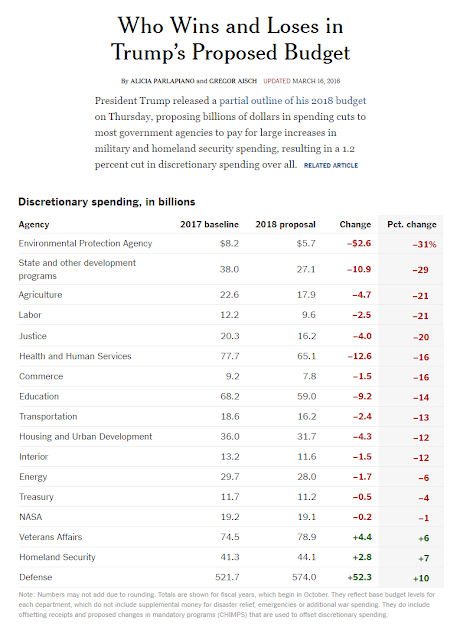 There you have it… more harm done to average Americans in one budget proffered by our own President and his Congress than could possibly be accomplished by any terrorist group in 100 years.

Go here for Trump's budget compared with other recent presidents