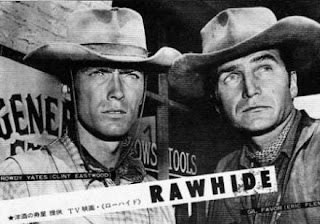 Fear is one of the prime motivators of life.
We fear making wrong decisions. We fear appearing stupid. We fear many things.

Oddly, we never fear making good decisions, because, well, the results are usually good, depending on the issue bein' decided, of course.

Should we fear Mr. T as president or Sec. Clinton?

Now that our FBI Director has muddy-up the waters and caused a massive outcry of “offendedness” by issuing his “October Surprise”, which has morphed into untold levels of fear amongst potential voters, I am doin’ a whole lot of “fearin’” myself.

In order to lower my “fear” quotient, I decided to seek counsel from a childhood hero.

Yes, going back to the days when things were black and white is SOP for me. After all, back then we all knew that our heroes would make the right decisions for the right reasons, no matter the situation.

That’s why I felt good after watching one of those old TV westerns. Take Rawhide, for instance. When Mr. Favor (Eric Fleming) and Rowdy Yates (Clint Eastwood) made a decision I always knew it was for the right reason and everything would turn out fine.

Now, who would Mr. Favor and Rowdy vote for in this election?

I know there’s a message from the past waiting to be rediscovered and help resolve this very dilemma. Let’s watch an episode and discover the pearls of wisdom waiting there for us.

Pete is injured, so Favor and Rowdy into a nearby town for a doctor. Because the town lynched a man the day before, the residents along with Favor and Rowdy are held hostage until the Sheriff and the man who led the lynching are also hung.