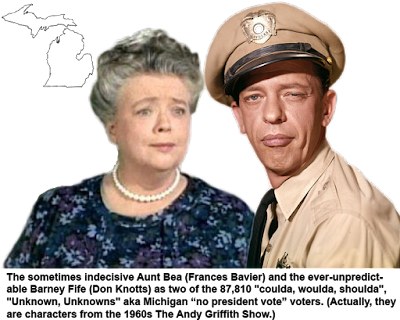 A few years ago Sec. of Defense Donald Rumsfeld became famous for his dissertation, “Known Unknows and Unknown Unknows” at a news briefing (12 Feb 2002) about the lack of evidence linking the government of Iraq with the supply of weapons of mass destruction to terrorist groups. I remember being awestruck with his command of doubletalk and thinking, “This man is the Absolute King of B.S.”

Rumsfeld actually said, ”Reports that say that something hasn't happened are always interesting to me, because as we know, there are known knowns; there are things we know we know. We also know there are known unknowns; that is to say we know there are some things we do not know. But there are also unknown unknowns – the ones we don't know we don't know. And if one looks throughout the history of our country and other free countries, it is the latter category that tend to be the difficult ones.

Well, I’ve recently discovered (thanks to an email from my brother, Gary, pointing to a Guardian article*) that he was close to being correct about the “unknown unknowns” part of his B.S. statement — but not about Iraq.

“Unknow unknows” is actually an apt description of some Michigan voters.

No, it’s not the fact that Mr. Trump ended up the winner by 10,704 votes. It’s about the 87,810 voters (as of 19 Nov 2016**) who voted but didn’t vote for a presidential candidate. For whatever reason, each one of them chose not to vote for president by leaving that part of their ballot blank.

Here in Michigan, those are the people who could have chosen Hillary and changed the election results.

They were Michigan’s Unknown Unknowns.

Indeed, Mr. Secretary, our Michigan Unknown Unknowns are, “the ones we don't know we don't know. And if one looks throughout the history of our country and other free countries, it is the latter category that tend to be the difficult ones.”

* "In fact, an unprecedented number of Michigan voters cast ballots without choosing either Clinton or Trump. This kind of voting happens every election – where voters make their preferences known down-ballot but don’t mark anyone for president – but never in such numbers. In 2012, there were 50,000 Michigan voters who declined to choose any presidential candidate. In 2016, there were 110,000."
Clinton lost Michigan by 13,107 votes. None of the Old Rules Apply: Dave Eggers Travels Through Post-Election America, Dave Eggers, The Guardian, 18 Nov 2016.

** As of 19 Nov 2016, the number of "no votes for president" appears to be 87,810 as deduced by addin' and subtractin' the election returns from the Michigan Sec. of State election returns page. Go here and here to check my deducin' mathematical skills.
Posted by Ron Baker at 7:24:00 AM