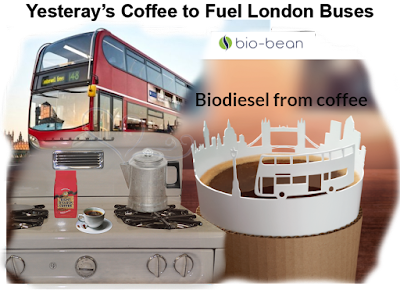 Working nights as an orderly at Akron City hospital help pay my way through college and often it was Grandma Baker’s coffee that helped me make it to work. She always had some Eight O’Clock coffee brewing on her stove when I’d stop by her place to see how she was doing. We’d talk for a few minutes and then I’d head out to work. I still remember the wonderful aroma of that coffee when I think about those few precious moments.

Next time I visit London I may reprise that coffee memory because the buses are scheduled to be powered by bio-diesel fuel comprised of coffee grounds and some other stuff. It’s a great idea that I hope we’ll bring home to the USA one day soon.

It is the first time a coffee-derived biofuel will be used on London's public transport system
Waste coffee grounds will be used to help power some of London's buses from Monday, it has been revealed.

A biofuel created by blending oil extracted from coffee waste with diesel is to be added to the public transport fuel supply.

Technology firm bio-bean says it has produced enough coffee oil to power one bus for a year.
Transport for London (TfL) has increasingly turned to using biofuels to reduce transport emissions.
Will buses be run on coffee in future?

Biofuel made using waste products such as cooking oil and tallow from meat processing is already used in many of the capital's 9,500 buses.

However, this is thought to be the first time a coffee-derived biofuel has been added to London's public transport system.

Londoners create 200,000 tonnes of coffee waste a year, according to bio-bean.

The company takes the used grounds from coffee shops and instant coffee factories, and extracts oil from it in its factory.

This is then processed into a blended B20 biofuel.

Buses can be powered using the fuel without the need for modification.