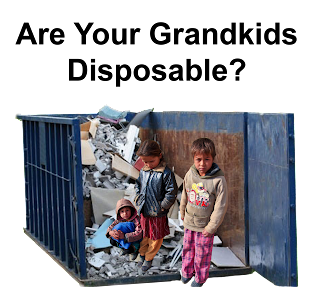 As far as the calendar is concerned, Halloween has passed on.

But life squandering, scary politics didn't. It is still with us and likely to stay. It has crawled out of its grave, hungry for fresh blood and looking for easy pickings.

Like easy immigrant targets from the past – the Irish, Italians, Polish, Jewish and many other nationalities and religious minorities – the conveniently powerless have been made into the foil for the Washington, D.C., party-in-control.

This time the disposable are the people of Puerto Rico, the immigrant children, the Dreamers, no longer protected by DACA, and the victims of the Los Vegas mass shooting at the Route 91 Harvest country music festival.

For political gain, the Washington, D.C., party-in-control has trash-canned these defenseless humans.

When their usefulness is consumed, who next will be thrown into the trash? Will they be your grandkids?

Here’s the whole story.
Disposability in the Age of Disasters: From Dreamers and Puerto Rico to Violence in Las Vegas, Henry A. Giroux, Truthout. 2 Nov 2017.