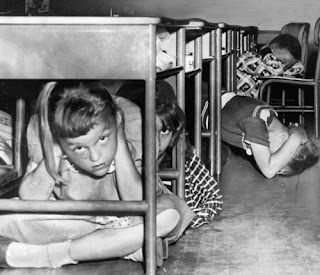 In another time we believed that a shared fear of “mutual destruction” would keep us all safe. The idea touted to us, the common people, was that our enemy, the USSR, and us, the Western World, understood that both had enough nuclear bombs, etc. to destroy the other several time over. Therefore, our leaders concluded, that all was fine and balanced.

Unless, of course, somebody, accidentally tripped a switch somewhere and sent a missile flying toward the other. In that case we all knew, from our grade school “Duck and Cover” practice drills, we would, posthaste, become lumps of cinder.

Our world has survived cinderization for more than 60 years. No doubt we’ve often come close to nuclear insanity on a number of occasions. But, to my knowledge, our White House leadership has never seriously considered unleashing our destructive inventory.

Consider that one of Mr. Trump’s closest advisors, Steve Bannon, a member of the National Security Council, believes that “war in the South China Seas” is unavoidable.

“In Bannon’s view, we are in the midst of an existential war, and everything is a part of that conflict. Treaties must be torn up, enemies named, culture changed. Global conflagration, should it occur, would only prove the theory correct. For Bannon, the Fourth Turning has arrived. The Grey Champion, a messianic strongman figure, may have already emerged. The apocalypse is now.”

“'There’s clearly a fifth column here in the United States,' Bannon warned in July 2016. 'There’s rot at the center of the Judeo-Christian West,' he said in November 2015. 'Secularism has sapped the strength of the Judeo-Christian West to defend its ideals'’ he argued at the Vatican conference. The 'aristocratic Washington class' and the media, he has claimed, are in league with the entire religion of Islam and an expansionist China to undermine Judeo-Christian America.” (1.)

Consider that, Michael Anton, a senior national security official in the Trump administration, zealously believes his own distorted, fringe perspective of U.S. history. In March, 2016, he wrote:

“[One] source of Trump’s appeal is his willingness — eagerness — gleefulness! — to mock the ridiculous lies we’ve been incessantly force-fed for the past 15 years (at least) and tell the truth. “Diversity” is not “our strength”; it’s a source of weakness, tension and disunion. America is not a “nation of immigrants”; we are originally a nation of settlers, who later chose to admit immigrants, and later still not to, and who may justly open or close our doors solely at our own discretion, without deference to forced pieties. Immigration today is not “good for the economy”; it undercuts American wages, costs Americans jobs, and reduces Americans’ standard of living. …” (2.)

As you read this post our world is only seconds away from oblivion. Our fate is in he hands of one famously known for exhibiting his hair-trigger temper at the slightest provocation. See: Donald Trump Attacks Nordstrom For Dropping Ivanka Trump’s Clothing Line, for Mr. Trump’s latest Twitter hissy fit and obvious abuse of the office of the President of the United States.

It’s just a matter of time. We will be using our grade school “Duck and Cover” skills for real.

Still, I recommend not despairing. From what I remember, we put those nasty thoughts in a bottle and went about having fun. You should, too. So, Live, Love, Laugh, and Be Happy… live like it's the '50s when America was Great, the first time(?).