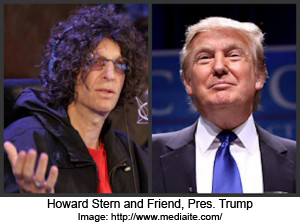 In a recent interview* Howard Stern, “The reformed ‘shock jock’” explained why his friend Mr. Trump may have decided to run for President of the .

Stern explained, “…he believes Trump ran for president in a bid to secure a better ‘Apprentice’ deal with NBC.”

Stern continued:
"I was shocked when he decided to run for president, and even more shocked that sort of, people took it seriously," Stern said. "He just wanted a couple more bucks out of NBC, and that is why Donald is calling for voter fraud investigations. He's pissed he won. He still wants Hillary Clinton to win. He's so f***ing pissed, he's hoping that he can find some voter fraud and hand it over to Hillary."

Will somebody please make an offer to NBC to take Mr. Trump back and pay him whatever he wants? Today! Please!