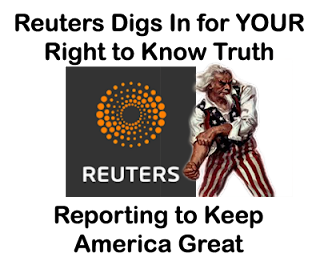 Reuters has single handedly restored my faith in mainstream media and given me a beacon to follow during the dark days ahead.

Yesterday, the venerable news agency announced that their reporters have been ordered to cover the Trump administration like authoritarian regimes, such as , and , and to expect physical threats.

In an article from Raw Story*, Reuters Editor-in-Chief Steve Adler said, “It’s not every day that a president calls journalists ‘among the most dishonest human beings on earth’ or that his chief strategist dubs the media ‘the opposition party’.”

“Among other advice, the news agency pointed out that reporters should ‘[g]ive up on hand-outs and worry less about official access.’”

“’They were never all that valuable anyway. Our coverage of has been outstanding, and we have virtually no official access. What we have are sources,’ the memo said. ‘Get out into the country and learn more about how people live, what they think, what helps and hurts them, and how the government and its actions appear to them, not to us.’”

“The letter encouraged reporters to ‘never be intimidated’ by the administration.”

I hope all other media follow Reuters' lead reporting fact-based information about the Trump administration and do not capitulate to bullying and intimidation.

In the future I’ll be looking FOR a Reuters’ tagline before I accept any story about the Trump administration as FACT-based. How about you?