About that Big Data Stuff 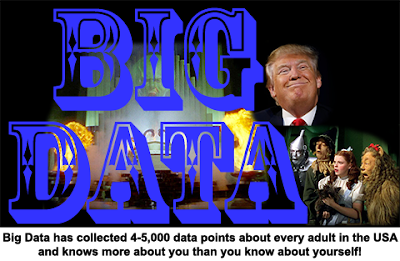 You’ve no doubt heard the term, Big Data. But, did you know that you were likely a “microtarget” of a Big Data operation during this past election?

Here’s a short course in Big Data and how the election people use it to get their candidate into power.**

The Power of Big Data and Psychographics

Published on Sep 27, 2016
In a 10 minute presentation at the 2016 Concordia Summit, Mr. Alexander Nix discusses the power of big data in global elections. Cambridge Analytica’s revolutionary approach to audience targeting, data modeling, and psychographic profiling has made them a leader in behavioral microtargeting for election processes around the world.
Speaker:
Mr. Alexander Nix
CEO, Cambridge Analytica

For more detail please take a gander at this article:
The Data That Turned the World Upside Down, Hannes Grassegger and Mikael Krogerus, Motherboard, 28 Jan 2017.

**Update:
It seems there is a question about just how much certain players were in charge of Mr. Trump's Big Data, "The campaign never used CA’s psychographic methodology, as a CA staffer who worked on the campaign later publicly acknowledged at a Google panel."
The Blow-It-All-Up Billionaires, Vicky Ward, 17 Mar 2017, The Huffington Post.