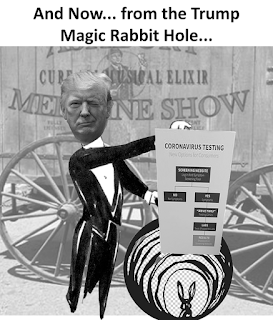 The other day Mr. Trump held a press conference and introduced his Coronavirus Testing plan to Americans. At the top of the plan, Mr. Trump claimed “Google was working on a website that would help worried Americans figure out if they needed to be tested for the novel coronavirus.”

The only problem? According to Google, there is no website.

Why would he claim a nonexistent website, one not even “on the drawing board”?

Mr. Trump must have been a victim of the notorious Vaporware Virus, known to have afflicted many a Silicon Valley investor in the past.

He certainly wouldn’t have made the whole thing up. Would he?

Yes, he would. After all, he does have a tendency to sell snake oil, too.

During his Friday afternoon press event—an event that seemed focused entirely on pumping up the stock market by name dropping as many corporations as possible—Donald Trump claimed that Google was working on a website that would help worried Americans figure out if they needed to be tested for the novel coronavirus. The website, according to Trump would be done soon, and would not only provide information on whether a test was called for, but advise on where to go for a test. Trump was not only very specific, noting that Google had “1,700 engineers working on this right now,” but took the time to make a backhanded swipe at the initial difficulties of the web site connected to the Affordable Care Act.

The only problem is … everything. Google is not building the website Trump described. Not with 1,700 engineers. Not at all. Another company owned by the same parent company as Google is working on a site connected to the coronavirus, but it is absolutely nothing like what Trump described. In a press event that was entirely designed to make Trump’s disastrous handling of this crisis look better, Donald Trump decided the best approach was to simply lie his ass off.