The One Choice Party Has Emerged 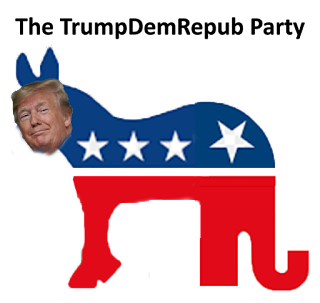 The obvious seems to be upon us following the “Super Tuesday” Democratic Party primary. That would be former VP Biden looks to emerge as the party’s candidate over Sen. Sanders.

That is a nightmare come true because it spells the continuation of corporate Democrats control of the Democratic party and little to no hope that we will see the progressive changes we must make to correct societal inequities and save American Predatory Capitalism from itself. It is more than likely that it will be the same-old-same-old if Mr. Biden were to be elected, that is to say, nothing will change for us, the average Joes and Janes of America.

Even worse, it is more than likely, barring some miracle, Mr. Biden will be defeated by Mr. Trump in November. Clearly, that will be a disaster for the people of the United States.

Chris Hedges, a Pulitzer Prize-winning journalist and New York Times best-selling author, explains why in the article below.

"Biden represents the old neoliberal order. He personifies the betrayal by the Democratic Party of working men and women that sparked the deep hatred of the ruling elites across the political spectrum. He is a gift to a demagogue and con artist like Trump, who at least understands that these elites are detested. Biden cannot plausibly offer change. He can only offer more of the same. And most Americans do not want more of the same. The country’s largest voting-age bloc, the 100 million-plus citizens who out of apathy or disgust do not vote, will once again stay home. This demoralization of the electorate is by design. It will, I expect, give Trump another term in office."

"We need to reintegrate those who have been pushed aside back into the society, to heal the ruptured social bonds, to give workers dignity, empowerment and protection. We need a universal health care system, especially as we barrel toward a global pandemic. We need programs that provide employment with sustainable wages, job protection and pensions. We need quality public education for all Americans. We need to rebuild our infrastructure and end the squandering of our resources on war. We need to halt corporate pillage and regulate Wall Street and corporations. We need to respond with radical and immediate measures to curb carbon emissions and save ourselves from ecocide and extinction. We don’t need a “Punch and Judy” show between Trump and Biden. But that, along with corporate tyranny, is what we seem fated to get, unless we take to the streets and tear the house down."

"There are no substantial political differences between the Democrats and Republicans. We have only the illusion of participatory democracy. The Democrats and their liberal apologists adopt tolerant positions on issues regarding race, religion, immigration, women’s rights and sexual identity and pretend this is politics. The right wing uses those on the margins of society as scapegoats. The culture wars mask the reality. Both parties are full partners in the reconfiguration of American society into a form of neofeudalism. It only depends on how you want it dressed up."

There is only one choice in this election. The consolidation of oligarchic power under Donald Trump or the consolidation of oligarchic power under Joe Biden. The oligarchs, with Trump or Biden, will win again. We will lose. The oligarchs made it abundantly clear, should Bernie Sanders miraculously become the Democratic Party nominee, they would join forces with the Republicans to crush him. Trump would, if Sanders was the nominee, instantly be shorn by the Democratic Party elites of his demons and his propensity for tyranny. Sanders would be red-baited — as he was viciously Friday in The New York Times’ “As Bernie Sanders Pushed for Closer Ties, Soviet Union Spotted Opportunity” — and turned into a figure of derision and ridicule. The oligarchs preach the sermon of the least-worst to us when they attempt to ram a Hillary Clinton or a Biden down our throats but ignore it for themselves. They prefer Biden over Trump, but they can live with either.

Only one thing matters to the oligarchs. It is not democracy. It is not truth. It is not the consent of the governed. It is not income inequality. It is not the surveillance state. It is not endless war. It is not jobs. It is not the climate. It is the primacy of corporate power — which has extinguished our democracy and left most of the working class in misery — and the continued increase and consolidation of their wealth. It is impossible working within the system to shatter the hegemony of oligarchic power or institute meaningful reform. Change, real change, will only come by sustained acts of civil disobedience and mass mobilization, as with the yellow vests movement in France and the British-based Extinction Rebellion. The longer we are fooled by the electoral burlesque, the more disempowered we will become.