Where Are Those Swamp Creatures? 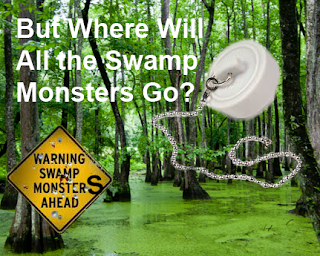 For just a moment or two, please join me as we travel way back in time to 29 Nov 2016, when we last visited the Swamp topic: Ah... about Draining That Swamp...

Yes, we were younger back then… but not dumber.

When Mr. Trump crowed about draining the D.C. swamp, most of us knew he was just spewing more B.S. to keep his followers' minds occupied with delusions of: "He's doing things no one else, especially Democrats, would think of doing, getting rid of the nasty people who steal my tax money and give it to the black/brown/illegal alien/do-nothings-on-welfare scum.”

So, what has transpired?

Here’s former Labor Sec. Dr. Robert Reich to bring us up-to-date about that swamp and its creepy occupants, who are now working for Mr. Trump and screwing you over. “You” means 99.9% of the U.S. population - even those who voted for Mr. Trump and still support him to this minute.

5 Ways Trump Has NOT Drained the Swamp with Robert Reich