Will Big Tech SuperHeroes Save U.S. from Drowning in B.S.? 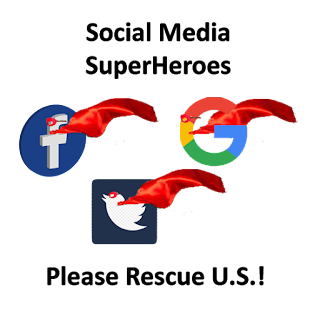 Each day we are subjected to a massive onslaught of misinformation, propaganda and outright lies originating from our two political parties, mainstream media, predatory capitalist corporations and a slew of other sources.

This is nothing new. Historically, the tools of disinformation, propaganda, "alternative facts", lies, misdirection, etc. have been in use since forever. All centers of power, religious, social, government, including the U.S. government, have used them when it suited their purposes.

The difference we face today is simply the medium or tools used to deliver the falsehoods and misdirection, i.e. social media, as well as the overwhelming volume or immenseness of the onslaught.

Fortunately, our world has not yet totally succumbed to this "Alternative Facts Cesspool" downpour.

With the help of the social media*giants, Google, Facebook, Twitter, we may still have time to turn the social media disinformation tools against the alternative facts / misdirection propagators

If, that is, they will turn on their awesome tech power brains and create a “tech” solution to do the “big lies” data sorting and lay bare those unadulterated truths we are all seeking.

If “they” will deal with the problem that their very existence has helped create, then hopefully, despite all the B.S. flying about, we will eventually find the nuggets of truth buried deep underneath.

As I see it, the big tech guys are all making big bucks. Now, they gotta help solve the big problem. So, Google, Facebook and Twitter – be the SuperHeroes we hoped you’d be! Save U.S. from drowning in B.S.

The Complicated Truth of Countering Disinformation, Christina Nemr and Will Gangware, warontherocks.com, 20 Sept 2019.**

A few mind boggling quotes from the article:

"...social media’s unprecedented ability to spread disinformation succeeds in part because of vulnerabilities in the way people process and evaluate information. In an information environment characterized by an oversaturation of content and algorithms designed to increase views and shares, narratives (true or not) can quickly go viral by appealing to our biases. This new, decentralized world of content creation and consumption is ripe for exploitation by nefarious actors who seek to spread doubt and untruths."

"To counter modern disinformation, then, we cannot focus solely on social media platforms or current technologies — we should also understand the psychological factors that underpin our identities and perceptions of the truth. Acknowledging the ways in which people are vulnerable to biased narratives is a key part of developing necessary multi-dimensional responses. Armed with this framework, stakeholders can then explore using disinformation tactics for the purpose of elevating credible information, supporting collaborative long-term research on psychological approaches, and creating public-private platforms to share key information across organizations."

"There are two constants in this complex information environment: the use of propaganda and disinformation as tools for influence and obfuscation, and the underlying psychological factors that make humans vulnerable to such narratives. What is subject to change, however, are the technologies by which such content is created and spread."

"Given these factors, it is important not to overstate the impact of technology, but rather to understand and address the interwoven complexities disinformation poses. In the near term, social media platforms are best positioned to lead counter-disinformation efforts, and these efforts should be made as transparent as possible in collaboration with government and other partners. However, all stakeholders should approach it as the multi-dimensional problem that it is, contending honestly with the cognitive limitations of people’s information intake and the ambiguous nature of what constitutes disinformation. Only then will we craft effective policies, regardless of the technologies involved."

Please go here for the whole thing...
The Complicated Truth of Countering Disinformation, Christina Nemr and Will Gangware, warontherocks.com, 20 Sept 2019.

*O.K., I know Google is not considered "social media" like Facebook and Twitter. Still, Google is a major player in all this disinformation mess stuff. So, they are in. Just like all the other "big tech" corps. As I see it, the big tech guys are all making big bucks. Now, they gotta help solve the big problem.

**Christina Nemr is Director of Park Advisors, overseeing counter-disinformation and countering violent extremism programming. She previously worked with the U.S. Department of State’s Bureau of Counterterrorism. Will Gangware consulted for Park Advisors and previously worked with the NYPD Intelligence Bureau. This article contains select excerpts from a larger report on psychological and technological vulnerabilities to disinformation found here, https://www.park-advisors.com/disinforeport. Please go here for the full report:  https://static1.squarespace.com/static/5714561a01dbae161fa3cad1/t/5c9cb93724a694b834f23878/1553774904750/PA_WMD_Report_2019.pdf The views expressed in this article are those of the authors alone and do not reflect the views of Park Advisors or its clients.