Our Lives Have Value 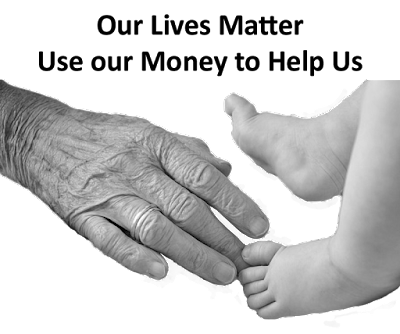 Reading Mr. Trump's budget reminded me that we have a choice.

We can choose to accept the same-old-same-old... more spending for the Republican Defense Industry Global Corporations and much less for what matters most for us, such as Environmental Protection, Health and Human Services, Agriculture, Transportation, Education, Medicare, Social Security, and diplomacy.

Or, we can make our government work for us by, "not taking it anymore".

Why? Because our lives have value. Government must begin to spend our money to help us.

Let's make change happen for us rather than continuing to accept the same-old-same-old again.

"Everybody's out of work or scared of losing their job. The dollar buys a nickel's worth, banks are going bust, shopkeepers keep a gun under the counter. Punks are running wild in the street and there's nobody anywhere who seems to know what to do, and there's no end to it."

"We know the air is unfit to breathe and our food is unfit to eat, and we sit watching our TV's while some local newscaster tells us that today we had fifteen homicides and sixty-three violent crimes, as if that's the way it's supposed to be."

"We know things are bad - worse than bad. They're crazy. It's like everything everywhere is going crazy, so we don't go out anymore. We sit in the house, and slowly the world we are living in is getting smaller, and all we say is, 'Please, at least leave us alone in our living rooms. Let me have my toaster and my TV and my steel-belted radials and I won't say anything. Just leave us alone.'"

"All I know is that first you've got to get mad. You've got to say, 'I'm a HUMAN BEING, God damn it! My life has VALUE!'

Email ThisBlogThis!Share to TwitterShare to FacebookShare to Pinterest
Labels: budget, lives have value, not taking it anymore"