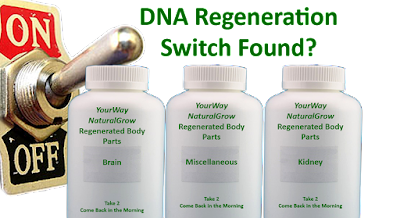 Just think... you'll never need the Wizard of Oz because you'll soon be able to regeneration your own body parts!

No doubt Big Pharma will figure out a way to charge you. Still, it'll be in there... a new brain, a heart, etc. All in your Walgreen's bottle.

Seriously, Harvard researchers may have found the DNA "switch" that controls whole-body regeneration.

"When it comes to regeneration, some animals are capable of amazing feats. If you cut off a salamander’s leg, it will grow back. When threatened, some geckos drop their tails to distract their predator, only to regrow them later."

"Other animals take the process even further. Planarian worms, jellyfish, and sea anemones can actually regenerate their bodies after being cut in half."

"Led by Assistant Professor of Organismic and Evolutionary Biology Mansi Srivastava, a team of researchers is shedding new light on how animals pull off the feat, along the way uncovering a number of DNA switches that appear to control genes for whole-body regeneration. The study is described in a March 15 paper in Science."