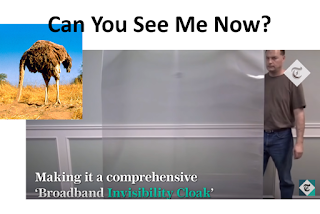 Like an ostrich hiding its head out of fear, an invisibility cloak is also a myth.

Really? The ostrich head-hide thing is not true. It's just a myth.

Ostriches don’t stick their heads into the ground, they tend to run away from a frightening situation - they can reach speeds exceeding 40 mph.

Now, here’s the proof that another myth has disappeared because what may not be visible is still there, hiding behind an “invisibility cloak”. Oh, "my lyin' eyes".

But now, the company has patented a new “Quantum Stealth” material that disguises a military’s soldiers — or even its tanks, aircraft, and ships — by making anything behind it seem invisible.

Light Bender
Earlier in October, Hyperstealth filed a patent for the material, which doesn’t require a power source and is both paper-thin and inexpensive — all traits that could make it appealing for use on the battlefield.

According to a press release, it works by bending the light around a target to make it seemingly disappear. This light can be in the visible spectrum, or it can be ultraviolet, infrared, or shortwave infrared light, making the material what Hyperstealth calls a “broadband invisibility cloak.”

Ready For Battle
Alongside the news of the patent application, Hyperstealth released more than 100-minutes worth of footage describing and demonstrating the material — and if the press release doesn’t make it clear that the military is the company’s target customer, the video footage sure does.