The other day Pope Francis unveiled a sculpture honoring refugees and migrants at St. Peter’s Square in Vatican City.

The theme struck home for me because we are all U.S. immigrants. Every one of us, or our ancestors, arrived here from somewhere else, most often with just a dream and prayer in our hearts.

Our only difference is the date we arrived. Otherwise, we are all the same. 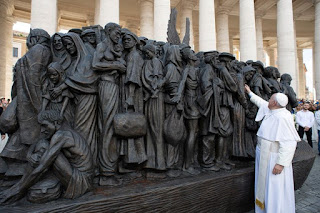 "Do not neglect to show hospitality to strangers, for thereby some have entertained angels unawares." - Hebrews 13:2 English Standard Version (ESV)

A new statue has been installed in St. Peter’s Square for the first time in 400 years ― and it’s a testament to Pope Francis’ enduring concern for the plight of refugees and migrants.

Francis dedicated the 20-foot tall bronze sculpture at the Vatican on Sunday to commemorate the Roman Catholic Church’s 105th World Day of Migrants and Refugees.

The life-size sculpture, titled “Angels Unaware,” depicts a group of 140 migrants and refugees from various cultural backgrounds and time periods traveling together on a boat. There are figures representing Jews fleeing Nazi Germany, Irish people escaping the potato famine, Cherokee traveling the Trail of Tears, as well as modern-day Syrians fleeing war.

A pair of angels’ wings peek out from the crowd, suggesting the sacredness of migrants’ lives. The artwork was inspired by a biblical passage, Hebrew 13:2, that encourages Christians to show hospitality to strangers, since by doing so, “some have entertained angels unawares.”

The statue by Timothy P. Schmalz is seen after Pope Francis held a Mass for the World Day of Migrants and Refugees at the Vatican on Sunday.

In a message on Sunday, the pope decried economically advanced societies’ growing “indifference” toward migrants, refugees, displaced persons and victims of trafficking.