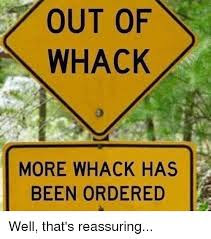 Queen Marie Antoinette, wife of Louis XVI, lost her head in 1793 during the French Revolution. The anti-monarchists of her time labeled her, “Madame Déficit”, crediting her with “single-handedly ruining France's finances”, due to “perceived frivolousness and her very real extravagance”, to say nothing of the fact that she was an Austrian by birth and a woman too. Both, evidently, hated by true-blooded Frenchmen at the time.

The phrase, Let them eat cake, is often mistakenly attributed to her when told that people were suffering due to widespread bread shortages. She never said the words, however.

Still, she lost her head.

While it appears no one is in danger of having his head misplaced today, it is possible that a couple of federal employees might be contemplating tossing a few rotten eggs toward Mr. Trump and his cabinet secretaries. For, while those 800,000 or so working stiffs are going unpaid and shut out of work, the top dogs are getting $10,000 raises.

There’s something out of whack here, don’t you agree?

While many federal workers go without pay and the government is partially shut down, hundreds of senior Trump political appointees are poised to receive annual raises of about $10,000 a year.

The pay raises for Cabinet secretaries, deputy secretaries, top administrators and even Vice President Pence are scheduled to go into effect beginning Jan. 5 without legislation to stop them, according to documents issued by the Office of Personnel Management and experts in federal pay.

The raises appear to be an unintended consequence of the shutdown: When lawmakers failed to pass bills on Dec. 21 to fund multiple federal agencies, they allowed an existing pay freeze to lapse. Congress enacted a law capping pay for top federal executives in 2013 and renewed it each year. The raises will occur because that cap will expire without legislative action by Saturday, allowing raises to kick in that have accumulated over those years but never took effect, starting with paychecks that will be issued next week.

There was no immediate comment Friday by the White House. A spokesperson for Pence also did not immediately provide comment.

The government payroll system has yet to implement the pay raise for executives including the vice president, a congressional aide said. But given the hardships the budget impasse imposes on the rest of the country, “the optics of this are not pretty,” said Jeffrey Neal, a former personnel executive at the Department of Homeland Security and now a senior vice president at ICF.

Some 800,000 federal employees, out of a workforce of 2.1 million, are in unpaid status because of the partial government shutdown that began last month. Of those, about 380,000 have been furloughed. Many others are working without pay, and just before the New Year, President Trump ordered a pay freeze for most federal workers, working or not.