Ah... We Have a Challenge 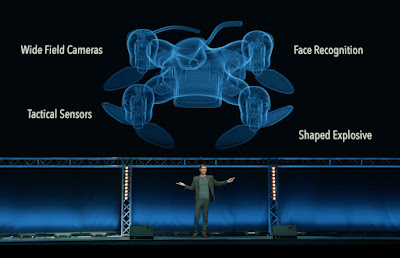 Autonomous Weapons... killer robots... are the "mustard gas", the "nuclear bombs", the "Weapons of Mass Destruction" (WMD) of our time.

And, Mr. Trump, your wall is not up to this…a real terrorist challenge.

Seriously, if I were you, I'd be worried about my personal security.

From the film Slaughterbots...

"The weapons took away the expense, danger, and risk of waging war. Now we can't afford to challenge anyone really, not even the smallest fringe group or a crank."

"Who could have done this?"

So, how many trillions of dollars are we spending on obsolete aircraft carries, tanks, jet fighters, missiles, etc.?

Is someone with a brain in charge? That would be someone not on the take... someone who has not sold out to the big corporations or the "enemy"... someone who is not a coward. We need leaders who care about the people rather than their own fame and fortune...NOW.

"We’re on the verge of creating autonomous weapons that can kill without any help from humans."

“Nuclear is obsolete. Take out your entire enemy virtually risk free. Just characterize him, release the swarm, and rest easy.” These were some of the first words said in the short film “Slaughterbots.” A joint project between University of California at Berkeley professor Stuart Russell and the Future of Life Institute, the short gives viewers a warning about a fictional dystopian future."


If this isn't what you want, please take action at http://autonomousweapons.org/