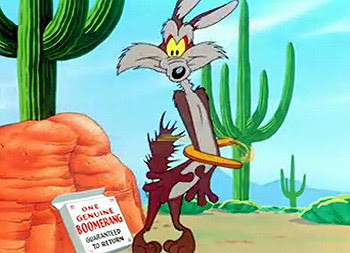 From the goes around comes around file: "I wish I hadn’t tossed that thing out."

Mr. Wile E. Coyote of Looney Tunes fame must certainly wish he hadn’t tossed that boomerang thing out. After all, his was guaranteed to come back. Apparently, it did.

The same might apply to Mr. Trump’s regarding the “visa and alien” issue he regularly champions.
For instance, one must consider why Mrs. Trump’s entry into the USA has heretofore received so little attention. Until now.

The EB-1 visa is normally reserved for academics, doctors, and others with ‘extraordinary ability.'

At last, the White House has shared a bit of the mystery behind Melania Trump’s immigration to the U.S. The Washington Post reports that in 2001, Melania received a highly coveted EB-1 visa, generally reserved for renowned leaders in the arts, sciences, and business world. Hmm...

EB-1 visas, sometimes called “genius visas,” are normally given to highly accomplished artists, academics, doctors, and engineers around the world. Perhaps it should be explicitly said that Melania was neither an artist, nor an academic, nor a doctor, nor an engineer at the time. She was not engaging in any kind of “extraordinary” enterprise in 2001, unless you count her extraordinary tolerance for dating Donald Trump.

Of the million visas issued in 2001, just 3,376 were awarded to immigrants with an "extraordinary ability," according to the Post. Melania’s attorney told the paper the first lady was "more than amply qualified and solidly eligible" for the EB-1 visa, but would not provide any of the qualifications that Melania cited during her application. Recipients of the EB-1 visa must provide proof they have won a major award, along with “evidence of commercial successes in the performing arts, evidence of work displayed at artistic exhibitions" or "evidence of original contributions to a field,” the Post writes. Nothing in Melania's public profile suggests she received any such accolades—her previous career was in modeling.

For months, the Trump administration has ignored demands to release Melania’s immigration papers—highly ironic as Trump has repeatedly spewed his disdain for immigrants, particularly for those without legal documentation. He’s been critical of families who immigrate together, referring to them frequently with the conservative slur “chain migration.” Of course, Melania’s family followed her to the country through this very same process.