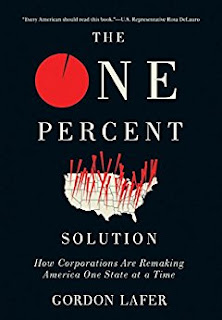 Last week, I discovered a video of Gordon Lafer* discussing his book, The One Percent Solution: How Corporations are Remaking America. (Lafer’s discourse, below, begins at about 8:50 in this 4 Apr 2017, Economic Policy Institute video. I read the book yesterday evening.)

The One Percent Solution: How Corporations Are Remaking America
Economic Policy Institute - 4 Apr 2017

Also yesterday, my brother, Gary, asked me for my thoughts about Apple CEO Tim Cook’s comments about Facebook “monetizing” member’s private information. You, know, making big bucks selling your personal interests and choices, in addition to your friend connections, to the likes of Cambridge Analytica for use by the politicos, like the Trump campaign.

Here’s the connection between Dr. Lafer and Tim Cook: I believe Lafer (PhD Political Science, Yale University, 1995) has figured out why… when the majority of Americans – Republicans and Democrats, progressives and conservatives – want similar changes in our society… nothing changes. And, from a humanistic point of view, our life situation keeps deteriorating.

I am guessing that Lafer might answer the question about Facebook with something like: Facebook is a corporation and it is rational for them to monetize member’s private information. It’s their business model. Apple has had a different business model since Steve Job’s time: charge an exceedingly high premium for products to induce a feeling of elitism over Microsoft/ IBM, etc., to stimulate sales from  the “zealot-like” Apple customer base.

In my mind, Cook’s comments about Facebook, Google, Amazon, etc., are remarkable in the sense that they are overflowing with disdain for his competitors as well as reflective of his personal arrogance.

Anyone who has followed Apple knows that Apple could care less for its customer’s “rights”. “Privacy to us is a human right, a civil liberty”, he says. In fact, there is no doubt that, if selling customer info were Apple’s business plan, he would do just that. The proof is in what Apple has done and continues to do, i.e. employing workers for “slave” wages and under conditions requiring workers to live in housing close by assembly plants so they are on call 24 / 7; retaining billions of dollars outside the U.S. to escape paying taxes, etc.

Because corporations do things to further their financial interests on a planned, rational basis, they have been collectively working to ensure their interests are fulfilled and maintained no matter the inhumane outcomes or the democracy-killing impact of their actions on Americans, even their own workers and consumers.

Who are “they”, the corporations? Lafer points to more than 50 of the most well known and trusted corporations, as well as lobbyists, such as ALEC, American Legislative Exchange Council, the Chamber of Commerce, the National Association of Manufacturers, the National Federation of Independent Businesses, and a multitude of Koch Brothers funded corporations, nonprofits, think tanks, and organizations. 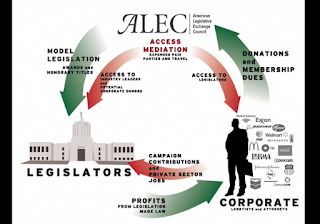 ALEC has evolved into the corporation fulfillment dream tool, working directly with state-level politicos, in all 50 states, to write legislation, work to get it passed and work to elect their “partner” legislators by providing not only election funding, but also worker bees to perform the door-knocking, phone calling, twitter tweeting and Facebook messaging for them. All that manipulation totals to over an estimated $1 billion in electioneering, democracy obliterating corruption.

Now, I understand why, throughout the nation, nothing gets done and why politicos are doing the bidding of ALEC and the corporate lobbyists, despite knowing that the corporate / ALEC “agenda is - on a bipartisan basis - deeply unpopular”.

The facts are that the majority of the American public:

So, how does ALEC advance an agenda that is going to make life less equal and harder for the majority of Americans without provoking a populist backlash?

I don’t know about you, but all this ALEC stuff has pissed me off. I’ve decided to do my best to conjure up an ALEC antidote. Perhaps we will create several while we are at it, too.

*Lafer has an interesting background. He is a “political economist and Associate Professor at the University of Oregon’s Labor Education and Research Center. Lafer has served as Senior Policy Advisor for the U.S. House of Representatives’ Committee on Education and Labor, and has been called to testify as an expert witness before the U.S. Senate, House of Representatives, and multiple state legislatures.  He is also a Research Associate with the Economic Policy Institute (EPI), where he has written widely on issues of labor, employment and education policy. His first book, The Job Training Charade, explains why job training schemes remain a politically popular response to unemployment despite their manifest failure. Lafer started his career as an economic policy analyst in the Office of the Mayor in New York City under Mayor Ed Koch.”

“In the aftermath of the 2010 Citizens United decision, it's become commonplace to note the growing political dominance of a small segment of the economic elite. But what exactly are those members of the elite doing with their newfound influence? The One Percent Solution provides an answer to this question for the first time. Gordon Lafer's book is a comprehensive account of legislation promoted by the nation's biggest corporate lobbies across all fifty state legislatures and encompassing a wide range of labor and economic policies. In an era of growing economic insecurity, it turns out that one of the main reasons life is becoming harder for American workers is a relentless—and concerted—offensive by the country’s best-funded and most powerful political forces: corporate lobbies empowered by the Supreme Court to influence legislative outcomes with an endless supply of cash. These actors have successfully championed hundreds of new laws that lower wages, eliminate paid sick leave, undo the right to sue over job discrimination, and cut essential public services. Lafer shows how corporate strategies have been shaped by twenty-first-century conditions—including globalization, economic decline, and the populism reflected in both the Trump and Sanders campaigns of 2016. Perhaps most important, Lafer shows that the corporate legislative agenda has come to endanger the scope of democracy itself. For anyone who wants to know what to expect from corporate-backed Republican leadership in Washington, D.C., there is no better guide than this record of what the same set of actors has been doing in the state legislatures under its control.”