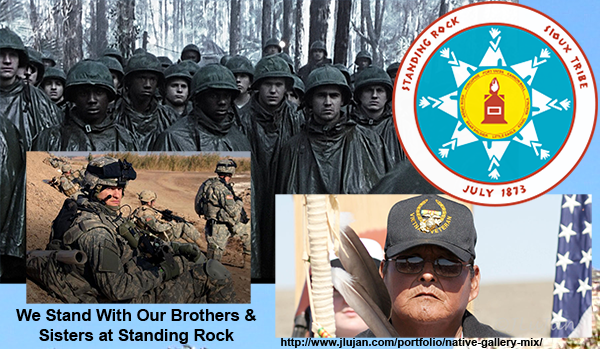 Today's post is about much more than a statement about our failed political system. It is about our way of life... a life worth living. Those of us who have served in the military took an oath of honor to defend our Constitution against all enemies, foreign and domestic. We worked together to achieve our missions and learned that our personal survival was in the hands of our brothers and sisters. Today, just as our ancestors answered their call to defend their freedoms in their time, we are answering our call (4 Dec 2016) to stand with our brothers sisters at Standing Rock to help them defend their freedoms... our freedoms. We are all partners in this life. First, we agree to help each other. - RB* (Please see Here & Now interview of former Marine, Dakota Blue Serna, below.)

The class action suit, filed on behalf of persons who were injured on the night of November 20 and early morning of November 21, seeks an immediate injunction preventing the Morton County Sheriff's Department and other law enforcement from using impact munitions such as rubber bullets and lead-filled "beanbags," water cannons and hoses, explosive teargas grenades and other chemical agents against protesters.

Beginning on the evening of November 20, officers from the Morton County Sheriff's Department and assisting agencies confronted peaceful Water Protectors at a bridge near the Standing Rock protest camp and within the boundaries of Oceti Sakowin (Seven Council Fires, or Great Sioux Nation) treaty lands. Without giving any warnings or opportunity to disperse, officers fired on them with highly dangerous munitions, chemical agents, a water cannon and hoses in freezing weather. More than 200 Water Protectors were injured.

"The Morton County Sheriff's office not only violates the constitutional rights of peaceful protesters, but their actions highlight the long history of abuse against Indigenous peoples," said Brandy Toelupe, WPLC lawyer. "From the beginning, governments have used their latest technologies to take land and resources from Native nations and oppress Indigenous peoples. Sheriff Kirchmeier's actions make it clear that nothing has changed," she added.

The complaint describes the excessive force with which the nine class representatives were met while peacefully protesting. Five are Native, including two members of the Lakota Nation. Vanessa Dundon of the Navajo Nation was hit in the eye with a tear gas canister that was shot by police directly at the crowd of Water Protectors. Jade Kalikolehuaokakalani Wool had two grenades blow up near her head, knocking her down, burning her face and sending shrapnel into it, and causing her to be hospitalized. Crystal Wilson was shot with a water cannon, tear gassed and shot with a munition. David Demo was filming police when, without warning, they shot him with a water cannon and then in the hand with a munition. He was hospitalized with broken bones and was told he would need reconstructive surgery.

"The civil rights violations that night were deliberate and punitive," said Rachel Lederman, WPLC lawyer. "The Morton County Sheriff's Department's illegal use of force against the Water Protectors has been escalating. It is only a matter of luck that no one has been killed. This must stop."

Those concerned are urged to call local and federal agencies below to demand (1) immediate end to construction of the $3.8 billion Dakota Access Pipeline, (2) the immediate cessation and a full investigation into law enforcement abuses, (3) dropping felony charges against water protectors from the October 27 police raid, and (4) permitting the Water Protectors to stay at their current encampment until the DAPL's application to drill under Lake Oahe and the Missouri River is permanently denied.

The Water Protector Legal Collective is the National Lawyers Guild legal support team for those engaged in resistance to the Dakota Access Pipeline. It maintains a 24/7 presence on-site at the Oceti Sakowin camp near Cannon Ball, North Dakota. 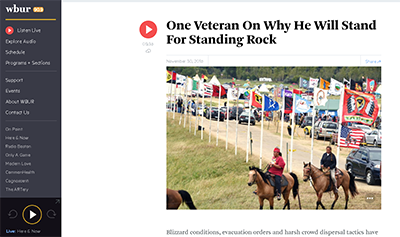 "This weekend, a group of veterans are heading to the site to act as "human shields" for the protesters. Thousands have registered to go. Here & Now's Robin Young speaks with one of those vets, Dakota Blue Serna (@dakotabusmc), a former Marine."