Joe & Jane Lunch Bucket Take It on the Chin 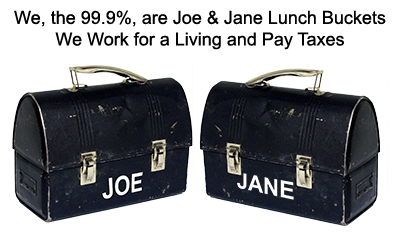 A day or two ago I discovered an article about the ALECK (The American Legislative Exchange Council) people and their effort to end living wages and a few benefits across the nation. They have previously been successful in 20 states, now joined by Ohio, upping the number to 21. These are the states that have passed ALECK-authored legislation forbidding local governments from adopting progressive living wage standards and paid sick leave benefits. 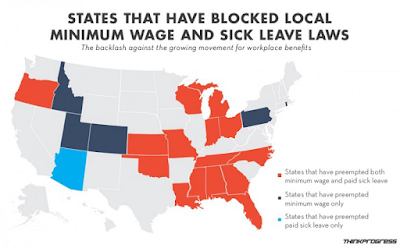 I won’t even go into how other “wealthy, western” nations have long ago ensured living wages and working conditions for their people. It is sadly enough to say that the USA is way behind because Republican controlled legislatures’ have totally swallowed ALECK’s “other universe” B.S. line that workers need to be paid the barest of wages so that businesses will locate or stay in their state.

Our people, that’s YOU and me, the 99.9% Joe and Jane lunch buckets, have been and are seriously takin’ it on the chin each hour of each day because of our “conservative” state legislatures’ “misguided” or perhaps, genuine disdain for helping the working class “others” of our nation (meaning US) control and enjoy even an itty-bitty-bit of reward (a.k.a. profit) brought about by our own labor productivity improvements.

You know, whether it is white or blue collar receiving a living wage and benefits in exchange for honest, productive labor is not a new idea.

Today, even $15/hr is barely enough to pay for life’s essentials, like housing, food, safety, gas and electricity, let alone a college education. Even the toughest of old birds, Mr. Henry Ford, knew he had to pay his workers enough so that they could purchase the cars they built so that he could enjoy even more profit as more and more people bought his cars.

For us, it is likely that ALECK will continue efforts to repress living wages throughout the nation under the Trump administration. So, we can expect that more Republican controlled state legislatures will pass laws forbidding local governments to remedy slave-labor wages by passing local ordinances enforcing living wage minimums in their jurisdictions.

Combine ALECK’s successes with Mr. Trump’s failed promises to "drain the swamp of Washington insiders" and "Make America Great Again" for "average American Trump supporters", i.e. "white" Americans, hard times will be gettin’ even harder for all of us - no matter our skin color or our heritage.

Bruce Springsteen - We Take Care of Our Own