Gone and Done… IT! 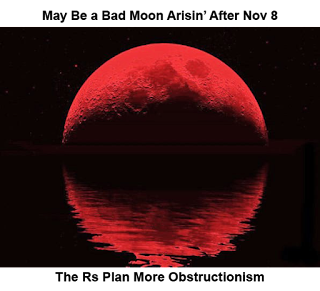 The latest move by the Congressional Republican leadership has gone and done it for me.

The other day Sen. McCain (R-AZ) said that the R-people would be “united against any Supreme Court nominee that Hillary Clinton, if she were president, would put up”.* The next day, the R from Texas, Ted Cruz, said the same.

So, it looks like for the next four years, at least, it’s goin’ be more of the same old obstructionism the Rs dealt Pres. Obama for the last eight years.

If that’s how the Rs see it, then I guess I’m goin’ have to do something I’ve never done before - vote straight-party Democrat. Why risk keepin' any Rs in office if they see bein' a massive pothole obstruction as Job #1 and actually tryin' to get something constructive done as Job #0.

I have never selected straight-party voting. I’ve instead chosen to consider each office contest individually because I’ve always considered myself to be an Independent — neither Republican nor Democrat.

However, as of yesterday, this election is now different. The game has changed, so to speak.

Uh oh… I just remembered… I did plan to vote for one or local R guys. Still, both are running uncontested, so they don’t need my vote. Whew! Maybe I can still try that straight-party-voting-thing after all.