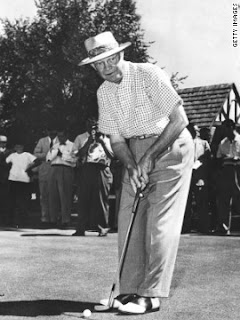 Dad was right about President Eisenhower.
He thought Ike was a “do nothing” president, I guess, because Ike seemed to take a lot of golfing vacation time.

Looking back on the late 1950s, from my child’s perspective, things seemed a lot simpler than today. Many shared Dad's perspective of Ike as the respected, safe "father" figure.

After all, it was safe to walk home from grade school by yourself; people said, “Hello, how are you today?” and actually waited to hear your reply; TV programs were fun to watch; and, I actually thought adults lived by the Gene Autry’s Cowboy Code.

Today, we do know that a lot was going on during the Eisenhower administration, thanks to several Freedom of Information Act (FOIA) requests.

We have discovered that even though Ike wasn’t doin’ the "goin’ on" part, others were doin’ the doin’ while Ike did the approvin’ and then the "playin’ golf" part.

While Ike's Sec. of State, John Foster Dulles and his brother, Allan Dulles, Director of the CIA, and their compadres were creating our world-wide image as what later became collectively known as, The Ugly American, at home, the CIA, under Mr. Alan Dulles, inaugurated operation Mockingbird to subvert what little Fourth Estate remained.


All this was partially outed by Carl Bernstein in his 20 Oct 1977, Rolling Stone article, The CIA and the Media.

Unknown to all of us naïve Americans, many members of the press had sold out, becoming pawns of the CIA, and accomplices in the duping of America.

At the same time, NSC-68 was under way*. That was the program aimed at molding US citizens’ opinion in favor of government military actions and foreign policy.

Later, another CIA program, detailed in CIA memorandum 1035-960, was implemented. That program was uncovered by a 1976  The New York Times FOIA request:

“The memorandum lays out a detailed series of actions and techniques for “countering and discrediting the claims of the conspiracy theorists, so as to inhibit the circulation of such claims in other countries.” For example, approaching “friendly elite contacts (especially politicians and editors)” to remind them of the Warren Commission’s integrity and soundness should be prioritized. “[T]he charges of the critics are without serious foundation,” the document reads, and “further speculative discussion only plays in to the hands of the [Communist] opposition.”

Like I said, Dad was right. But, he didn’t know how right he was.

Ike played a lot of golf but he also took his eye off the most important ball, so to speak. His style of laissez faire management allowed the boys to run unrestrained, freeing them to make their dream come true — the American oligarchy we have today.

* From Conspiracy Theory in America, by Dr. Lance deHaven-Smith:
“In actuality however, U.S. military and intelligence elites actively manipulate domestic affairs as a matter of policy. America’s national security elites have long declared that the U.S. public opinion must be molded and managed to maintain popular support for the nation’s military actions and foreign policies. A well-known example of such thinking is NSC-68, a report authored in 1950 by the National Security Council. While advocating covert operations to subvert communist regimes overseas, NSC-68 called for a public relations strategy at home to strengthen America’s resolve in the Cold War. ** For decades, presidents and other top officials have been routinely misleading the public about the nation’s foreign policies, tactics, and capabilities, and about the actions and capabilities of America’s enemies. American involvement in various coups and assassinations has been denied; American provocations of military conflict have been concealed; U.S. citizens have been secretly and illegally wiretapped and monitored — all in the name of national security. To the extent that national security elites are influencing national political priorities by manipulating the constellation of issues confronting the nation, all of the theories in the social sciences and their associated research programs are studying downstream phenomena while the real explanation of events resides earlier in time and higher in America’s authoritative hierarchy. In other words, it is quite possible that the social sciences are studying shadows and that the people making the shadows are designing them for effect. Of course, this was how Plato described the situation of the citizens, except that in his story, which we must assume was a noble lie, the philosophers were helping citizens understand the shadows, not using the shadows for social control.”