Drivin’ in the South? Stay Alert 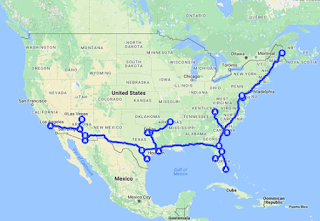 Like most people I have a tendency to believe that the roads where I live are worst in the nation. Well. They are – when it comes to the condition of the roads. Michigan has managed to neglect roads for the past few years.

We, the drivin' people, are ever hopeful since the state government has now gotten around to allocating the money needed to plug-up the holes.

But, when it comes to dangerous roads, one should be looking to the sunny climes. That is, to the east coast and especially the southern parts of the USA.

"Why are Southern interstates so deadly? It could be a lethal mix of high speeds, distracted driving, and lax regulations."

"Driving in America is becoming more deadly, with nearly 18,000 people killed in traffic incidents in just the first six months of 2016. That represents an increase of more than 10 percent over the same time last year—a period that saw similar gains over 2014. Fatalities per 100,000 miles driven are at a 7-year high."

"Many of the interstates with the most fatalities per mile are, unsurprisingly, some of the most heavily traveled in the nation. Florida’s infamous pileup-magnet I-4, which runs from Tampa to Daytona Beach, tops the list. The southernmost cross-country highway, I-10 from California to Florida, is up there, too, as is densely trafficked I-95 from Maine to (again!), Florida. Seeing the list in its entirety in the map above really emphasizes its southern bias. One of these highways is located entirely within the state of Texas (I-45) and three more pass through the Longhorn state (I-10, I-30, I-37). Arizona also has three of the top 10 dangerous interstates running through it."

"Why would such relatively dry, temperate and ice-free highways be so dangerous? Sheer volume is part of the answer: All of these are extremely well-trodden roads, with traffic volumes on most of them topping a quarter-million cars every day. But these states also clock in high on various rankings of distracted driving, with Arizona and Texas two of only a few states with no kind of behind-the-wheel ban on technology use (Montana is another). Texas also enjoys a new rural toll road with a posted 85 mile-per-hour speed limit, giving drivers there the highest average speed limits in the nation. Cell phone motion data from EverDrive supports the theory that drivers in at least two of these states are picking up their devices more than in others: Texan users turn to their phones an average 1.35 times per car trip and Floridians 1.4 times per trip, compared to a national average of 1.1 times."

Go here for the whole story... especially all those parts I left out:
America's Most Dangerous Highways, Laura Bliss, CityLab, 21 Oct 2016.