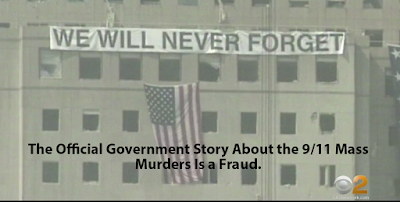 James Corbett describes it this way, “...six out of the 10 commissioners—Kean and Hamilton, as well as Bob Kerrey, Tim Roemer, John Lehman and Max Cleland—have all expressed concern that the 9/11 commission was misled, stymied, hampered by conflicts of interest, and, ultimately, forced to participate in a politically-motivated cover-up.”

He continued, “As it turns out, the majority of the commissioners felt that the commission had been lied to, deliberately obstructed, undermined by the White House, or set up with staff that had conflicts of interest in the investigation.”

"In their book, Without Precedent: The Inside Story of the 9/11 Commission, and in press conferences and interviews at the time the report was released, former New Jersey Governor Thomas Kean and former Indiana Congressman Lee Hamilton (chairman and vice-chairman of the commission) famously remarked that the commission had been 'set up to fail.'"

How much more “proof” do you require?

The official government story about the 9/11 mass murders is a fraud. Why does corporate media report otherwise or remain silent?

- More from Lies Too Big To Fail and, here, cold-blooded murder -