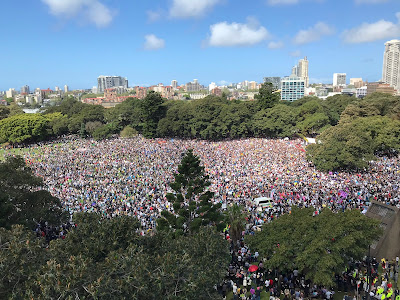 Millions of young people around the world are making their voices heard in support of dramatic climate action. Their combined hope is to spark their nation's adults into action.

God be with you!

I waited until late in the day to see how U.S. corporate media covered the story. What did you see and hear today?

I saw, like all of the most important issues we face today, this earth-saving story, driven by the youth of the world, being downplayed and ignored.

"The global climate strike began early Friday in Australia and countries across Asia and the Pacific, and continued in Europe and Africa.

By midmorning, protesters in the Eastern U.S. and Midwest gathered for some of the approximately 800 protests planned across the country."