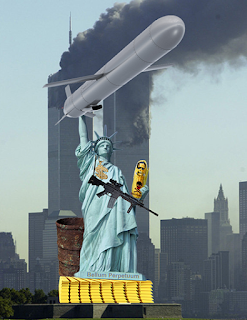 I so want to believe that a first step has finally been taken toward justice for the cold-blooded murder of nearly 2,974 innocents, hundreds of first responders, hundreds of thousands of 9/11 war casualties, and millions of innocents forced into exile due to the 9/11 wars, which were falsely and deceptively engaged by the Bush/Cheney administration.

That first step? Here it is:

NEW YORK, N.Y., Nov. 28, 2018 /PRNewswire/ -- The Lawyers' Committee for 9/11 Inquiry (part of the Architects & Engineers for 9/11 Truth) has received a letter from the U.S. Attorney for the Southern District of New York in response to its and 9/11 Family Members' Petitions (https://lawyerscommitteefor9-11inquiry.org/lc-doj-first-amended-grand-jury-petition/) demanding that he present submitted evidence of yet-to-be-prosecuted federal crimes relating to the destruction of WTCs 1, 2 and 7 to a Special Criminal Grand Jury.  The letter states: "We have received and reviewed The Lawyers' Committee for 9/11 Inquiry, Inc.'s submissions of April 10 and July 30, 2018.  We will comply with the provisions of 18 U.S.C. § 3332 as they relate to your submissions." -more-

The Grand Jury may help us begin to unpack the truth about 9/11. If so, that truth will set us free.

I’ll bet 10 cat’s eye marbles that you didn’t hear about this in the mainstream media… but, now you have… through the blogosphere.

Here’s more from Downriver USA about 9/11. And, more from the International Bureau of Forensic Investigations here.

Finally, I’m still struggling to come to terms with the faith-shattering evilness within those responsible for the 9/11 murders and the resulting holocaust they spawned.

The words of Dr. David Ray Griffin, Professor of Philosophy of Religion and Theology, Emeritus, at Claremont School of Theology and Claremont Graduate University, have helped me deal with these horrible, horrible demons. (Go to :37 in the video... but the whole video is well worth watching.)