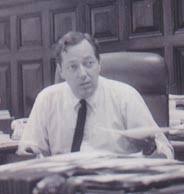 I came across some audio from Jim Garrison’s presentation to the Southern California Broadcaster Association (1967) this morning.

As I listened to him speak, I was startled by his prescient comments about the role of media and the rise of Fascism in the USA, as well as his recounting of facts from his findings regarding JFK’s murder.

Garrison’s statements ring clear and true today, despite years of vicious CIA-managed disinformation and media manipulation which effectively weaponized the US media against him and other JFK assassination investigators (See the Operation Mockingbird video clip below and please read Carl Bernstein’s 1977 article, The CIA and the Media.)

Garrison is perhaps best known for bringing charges against Clay Shaw in 1967. Shaw was the only person prosecuted in connection with the assassination of President John F. Kennedy. He was acquitted. Garrison charged that Shaw, along with others including David Ferrie and Guy Banister, were involved in a conspiracy with elements of the Central Intelligence Agency (CIA) in the murder of JFK.

Shaw denied any connection with the CIA, but in 1979, Richard Helms, former director of the CIA, testified under oath that Shaw had been a part-time contact of the Domestic Contact Service of the CIA. In 1996, the CIA revealed that Shaw had obtained a "five Agency" clearance in 1949.

Garrison was a hero. I hope more like him will come forward today.