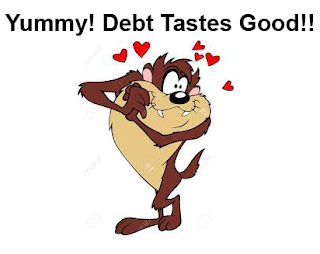 Now that Mick Mulvaney, Trump’s budget director and interim director of the Consumer Financial Protection Bureau, has ended the suit taking Golden Valley Lending to task for swindling millions of Americans, I believe it’s only just to support an Eat Debt Campaign, to try to help those swindled.

One such effort was launched to TV journalist Jesse Jones, who recently announced that for “for just $12,000 – he and the station had bought up the medical debt of 1,000 viewers”.

Jones is a cancer survivor and a reporter for KIRO, channel 7, a CBS-affiliated, Seattle television station.

Please go here for the story.

One organization that has been actively erasing debt for several years now is The Rolling Jubilee Fund, a Non-Profit 501(c)(4) Organization formed as a project of Strike Debt, with the exclusive mission of buying and abolishing debt. Strike Debt is an offshoot of Occupy Wall Street. At this date, The Rolling Jubilee Fund has erased nearly $32 million in debt by raising about $700,000 to buy debt for pennies on the dollar and then forgiving it.

Another Occupy offshoot, interoccupy.net, has become a communications conduit of sorts between Occupy organizations.

And, you thought Occupy was dead?

So, If the Trump Consumer Financial Protection Bureau is no longer the consumer protection agency of the 99.9%, then we fall back to the Occupy Movement and help people erase debt by using predatory-capitalist-methods against the gangster, predatory capitalists. Eat Debt!!