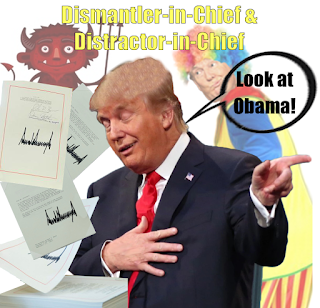 Is he THE master psychopath?

Is he a fool? Is he totally incompetent?

Is he disassembling our America, trashing what little consumer protection we have?

Is he implementing the most damaging, the most evil agenda ever conceived?

Yes. Mr. Trump is all of this and much more.

“It is quite tempting to dismiss Donald Trump as a gaudy con man who is feverishly stumbling his way through the presidency. However, that would be a mistake. Trump is the sneering lion tamer of the mainstream corporate press, snapping his whip with Twitter bursts that distract from the egregious destructiveness of his administration on so many fronts.”

“One could argue that the mass media has continued to bring up Robert Mueller's Russia investigation, but the rollout of the so-called "Nunes memo" is an example of how Trump uses the press as his foil. The release of the GOP report that chastises the FBI for investigating former Trump adviser Carter Page has been the subject of speculation for a week. Trump has teased the press about whether he will approve of release of the document with classified information, when all the while the White House may very well have coordinated the action with Rep. Devin Nunes (R-California), chair of the House Intelligence Committee. The general assumption is that the memo will discredit the FBI and the Mueller investigation of Trump.”

“Many of those who oppose Trump believe that he is on the ropes and desperate. However, there is another way of looking at his actions: He is masterful at redirecting the media to what he wants to focus on at any given moment -- and that often changes by the hour. Whether or not the public dissemination of the GOP House Intelligence Committee memo will tarnish the FBI enough to gain Trump support in his battle with the special prosecutor remains to be seen. However, it is another example of how Trump manipulates the media into focusing on his ongoing charges, outrageous remarks and general agenda of distraction.”