What will “the morrow bring?” They label themselves with innocent sounding names, like: “Alt-Right”, “Vanguard America”, “Identity Evropa”, the “Traditionalist Workers Party” and “True Cascadia”. They are proud to wear Nazi regalia and imitate the 1930s newsreel Nazis.

They are the extreme right-wing fringe of America.

They were like the neighbor’s kid, who delighted in pulling wings off bugs and breaking the necks of cats and squirrels. When we encountered him, we looked away and walk quickly… anywhere… far, far… away… from his evilness.

Now, we must confront their evilness. There is no place to hide.

Or, maybe not, if you’re a Trumpist.

Perhaps you will say, “The black man deserved to be beaten. Next time, the white militant will use his gun and there will be no rescuers to save him from his just reward.”

We have no choice now but to wait. What will “the morrow bring?”

Charlottesville: A Gun In His Face, Greg Palast, gregpalast.com,14 Aug 2017.

Don’t look away.  Four white neo-Nazis are beating a Black man, crawling on the ground, with their metal poles and a yellow hunk of lumber. The beating continues – there’s blood on the pavement.

The young victim is De’Andre Harris, a special education teacher in Charlottesville.

In the photos, you can see one white guy picking up the yellow barrier arm and raising the three-foot hunk of lumber high over his head before he brings it down on Deandre—who is being kicked by another white man’s boots while two others bring down metal rods on the prone man.

And no, that’s not a cop on the left in the photo—that’s a neo-Nazi in full riot gear.  Where were the cops?  Good question:  this parking garage is next to the Charlottesville Police Station.

De’Andre was saved when some gutsy young Black men—with no weapons—ran into the underground garage– and the white posse scattered. 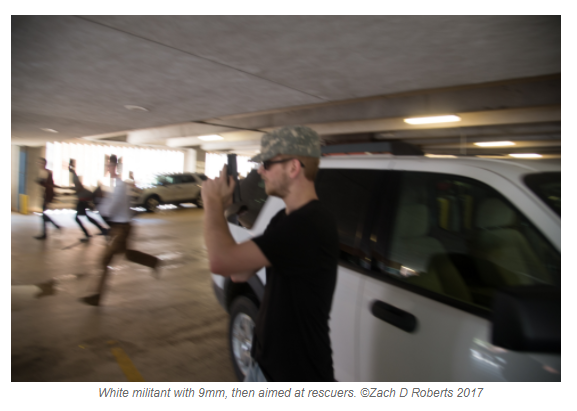 Except for one.  The gunman.

Our photographer, Zach D. Roberts, continues to shoot – even as a white militant raises a 9mm pistol to his face.

Zach got a shot of the gun and gunman, too. Luckily, the gunman didn’t shoot back.