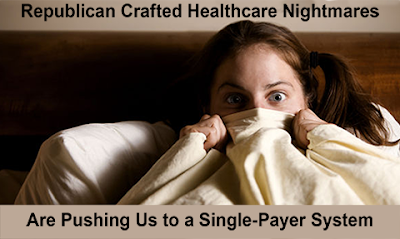 While sitting in a Metro Detroit hospital surgical waiting area, I began to relive the past few weeks of Republican-created healthcare nightmares.

They are the never-ending kind. Those that come back Zombie-like to torture us each and every night.

For instance, the Republican-controlled Senate and the Trump administration clearly and repeatedly displayed their contempt for the American public with a plethora of “skinny” bills, all secretly crafted to confine “grandma, grandpa, babies, teens and twenty-somethings to the healthcare garbage dump. And, then, they promised to keep coming back with more.

When Trumpcare flamed out again, the Republicans began skittering away from Washington, like cockroaches into the closest sewer when the lights suddenly come on. All of them… going into hiding from their constituents and questions from the “fake press” under the cover of a crescendo of diversionary Trumpian Twitter hissy fits and shotgunned threats, tossed helter-skelter at friends and foes alike.

This historic display of Republican governance was a disgusting tour de force of the most gangrenous side of our society.

Sadly, all — save three — heroic Republican people (R-people) joined with Mr. President-of-all-of-us fighting like legendary ninjas to exclude and deny a large portion of the U.S. population even the slightest shred of decent healthcare.

Predictably, like members of the Peoples Temple Jim Jones cult many of these millions continue to be ardent supporters of Mr. Trump and happily sip his concoction of poisonous cool aid.

Rationalism aside, it is clearly time to move toward a single-payer healthcare solution. Not just because healthcare is a serious issue and not a TV game show for bored Congressional R-people and Mr. Trump, but because it is the only solution proven to work for all people throughout the world.

Most importantly, the single-payer solution will save lives and help minimize suffering while also saving jigumbus amounts of money.

Finally, adopting a single-payer solution removes our healthcare from the R-people toy box. Denying healthcare as a drama-energizing diversionary plaything forces them muck up something else.


Here is what a single-payer healthcare system actually could be for All U.S. citizens.

Here are some answers to your questions and a plan, too, from the Physicians for a National Health Program (PNHP).

Here is The Guardian's article about the PNHP:

'We need fundamental changes': US doctors call for universal healthcare

A group of more than 2,000 physicians is calling for the establishment of a universal government-run health system in the US, in a paper in the American Journal of Public Health.

According to the proposal released Thursday, the Affordable Care Act did not go far enough in removing barriers to healthcare access. The physicians’ bold plan calls for implementing a single-payer system similar to Canada’s, called the National Health Program, that would guarantee all residents healthcare.

“Our patients can’t afford care and don’t have access to the care they need, while the system is ever more wasteful, throwing away money on bureaucratic expenses and absurd prices from the drug companies,” said David Himmelstein, a professor in the CUNY School of Public Health at Hunter College and lecturer on medicine at Harvard Medical School.

Himmelstein, one of the authors of the plan, said the proposal is meant as a rallying cry for physicians and other healthcare professionals around the cause of a single-payer model. According to the paper, even with the passage of the Affordable Care Act many patients “face rising co-payments and deductibles that compromise access to care and leave them vulnerable to ruinous medical bills”. Despite the current high healthcare spending levels in the US, healthcare outcomes are worse than in comparable well-funded countries.